We’ve just been at our first exhibition as exhibitors and we think it would be a good idea just to talk to all of you about all our impressions, ideas, problems and so on. So, I’m here writing in this post everything that comes out of my head, hoping it will help someone out there.

This is the second (and last) part of this long post. If you haven’t read the first part, you can find it here.

20th of November, the exhibition has arrived. How did you feel when everything began?

It was so… real! It was the first time we saw a booth with our name, people taking gadgets with our logo, our brochures… ImmotionAR was no longer only an idea, a wanna-be startup… it was a concrete startup! 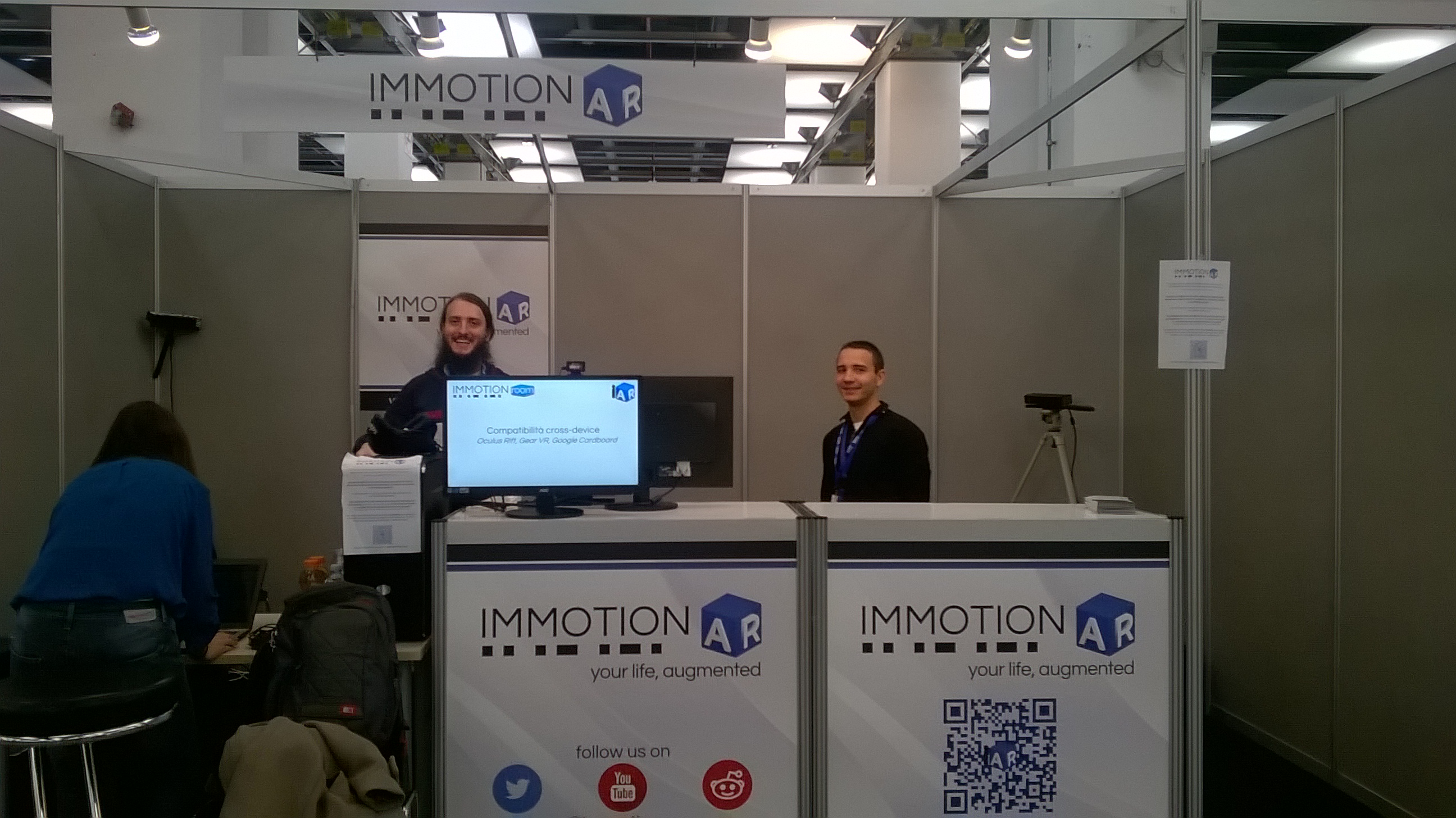 This is an incredible sensation I wish to every guy with an awesome idea out there!

Did you had any problems during the exhibition?

You can be sure that something will always not go as expected. New bugs will come to light, people will behave in a way different from the expected one, and so on. Mr.Murphy with his laws will show up and make something go wrong.

The first issue we had was that cellophane used to protected the booth fitted carpet interfered with Kinect infrared rays and so all body tracking just was terrible. So we had to cut it out to perform a valid tracking.

The second big issue was that for some strange bug, if I was in a certain position at the booth, everything went fine; if I was a step forward, all the program crashed. This strange bug made us restart the program a lot of times for the first users, until Gianni realized the workaround to stay all behind a certain imaginary line and everything luckily went better.

Then a lot of other problems showed up: sometimes the OculusRift just turned off by themselves or showed a strange all-white-display; a Kinect froze in always-on mode; two users were very tall and had problems to test our system (it had never been tested with so tall people). And every problem is traumatic if you have a lot of people looking at you and at what you are doing!

Then we had queue management problems: at out stand there was a lot more people than we could ever imagine! So we had problems in managing all this big queue: we tried to make a classical queue, but people didn’t like to stand there just to wait for us to make them try the system; so we began giving numbers to registrants, but then a lot of people took their number and then disappear, to return only when their turn was passed; we returned to a classical queue, but waiting time was more than an hour for person; in a word, people were never happy about queue management. Not to mention the fact that we run out of registration forms! There were too many people!!! 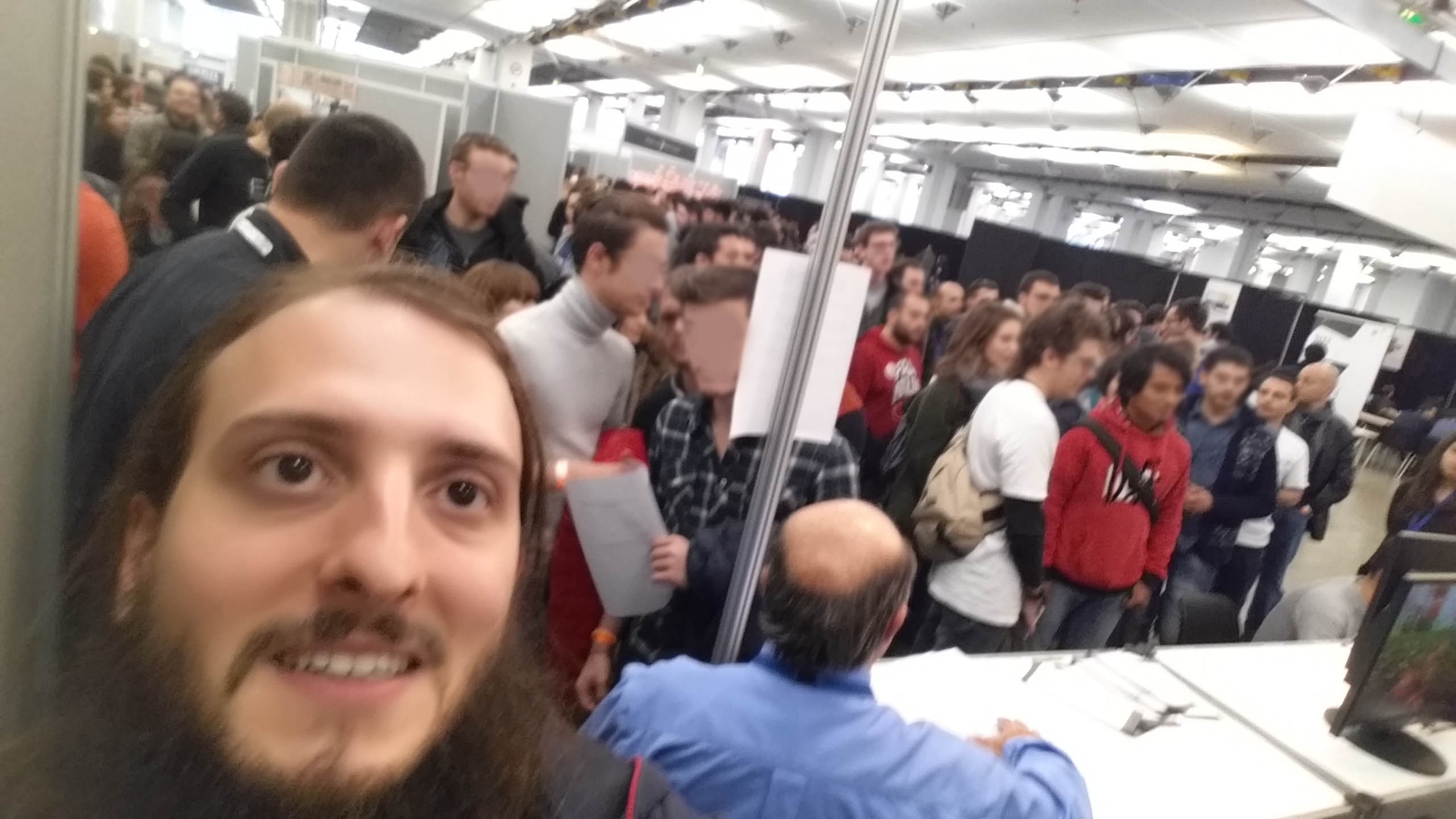 The lesson here is: there will always be something going wrong, so be prepared to be smart and try to do your best to solve it. And if there are more that one day, try every day to do better than the day before (e.g. the second day of the exhibition we started introducing our system initialization procedure to people waiting in the queue, so when was the turn of a person, he already knew everything about it and his demo last few time than the day before, when we had to explain everything to each user just before putting him the Oculus on his head).

Gianni’s workshop on Virtual Reality went sold out and was positively reviewed by anyone who attended it.

Our demo was a true success: more than 200 people tried it and managed to use it with just a little explanation!! This was a fantastic thing, considering the fact that until that day it was only a program tested in lab by only us. Some people didn’t like it (5 people circa), but all the other found it from good to fantastic. It is so awesome to see someone test a program of yours and like it so much to scream sentences like “It’s awesome!”, “So cool!”, “I want it!”. Two girls were so excited about it they screamed in joy all the time. I liked them a lot… I was very tired that day, but they made me so happy!

With this demo we realized that we are in the right path to make something people would like to use! After months of hard working with nothing but our critics, finally see someone that uses and likes our  product was… indescribable! 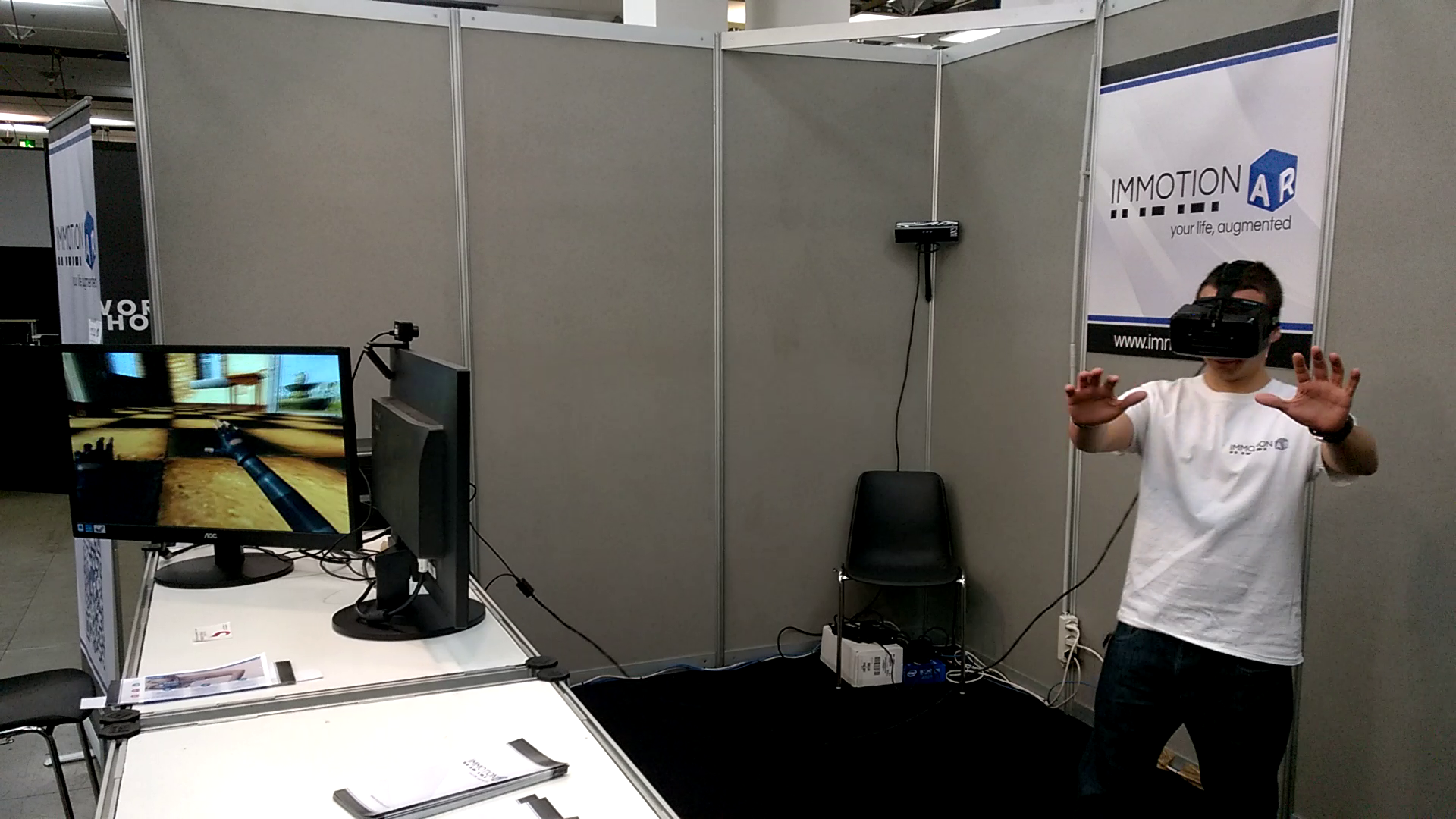 Some press guys came and see our solutions… and now we have some reviews around the web! You can see two of them here and here (sorry, links are only in Italian!). It has been the first time we had press coverage… and it was marvelous!

We made some networking (Networking! Don’t forget it! Never!) and exchanged business cards with other companies. And I talked a lot with the organizers: Jetop guys have been awesome during all the exhibition… I love you guys! :-) I can say some of them are friends now…

If you are a startup, you HAVE to meet as many people as possible, make new friends, new work contacts… be sincere and kind with everyone… because everyone could help you one day in this insane journey of becoming the boss of yourself.

Ah and I forgot: for the first time in my life, I had a radio interview! It was awesome…

How did you deal with people during the exhibition?

As Beppe Platania (of Beps Engineering) says: “you have to be very patient during an exhibition”.

The hardest part is when you have to repeat the same sentences all over the day to each person enters your booth. After 5 hours of repeating the initialization instructions of ImmotionRoom, I was seriously thinking about committing suicide :D :D :D. 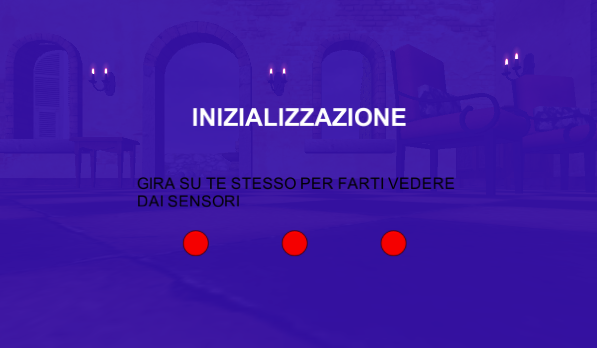 Can we see a video of a user testing your solution?

We can make you see a video of us testing our solution… you can find it here.

The exhibition went as expected?

Almost nothing went as I expected!

After all, do you think it has been a good idea to participate to WTT?

Yes. We met a lot of interesting people (like the guys of the GET wearable), we started potential collaborations with other companies and incubators, we obtained fantastic feedbacks… but the most important thing is that from now on we exists: we have validated our company with a successful public demo. From now on, nothing will be the same again!

From now on… what are your future plans?

To rule the world, obviously :-)

Seriously speaking, our future plans are to spend the next 2 months making fixes to the current prototype so that it could be sold to developers and to other people that want to use it for experimental setups in different scenarios. Then we’ll begin selling it and in the meanwhile we’ll start a Kickstarter Campaign!

Anyone you want to thank?

Actually, a lot of people, as we have written in this post.

Special mention to Beppe Platania that with his experience helped us during the most difficult moments of the event; and to Mariarosaria Pazzola, that has dedicated herself to produce the user survey and to follow all the survey fillings during the two days of the exhibition. She was marvelous and did an excellent work!

Any last words to your readers!

Whatever you want to obtain, keep up and fight for your dreams! And if you can support us in the realization of ours… please do it! :-)