Wandering in a virtual world


Since the first time we tried the Oculus Rift, about 6 months ago, we felt a big limit in its use: being seated in front of the PC and moving around with keyboard and mouse (or using a gamepad) instantaneously made us losing every immersive effect (and, above all, it caused nausea and motion sickness). 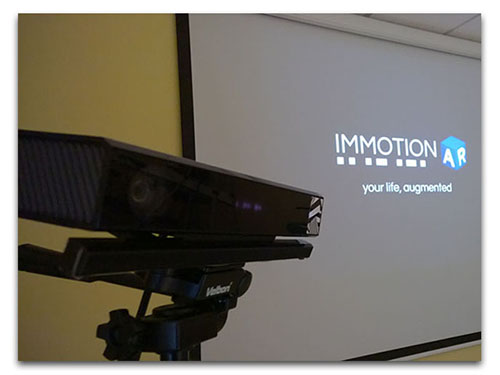 Browsing on the Internet, we found some interesting solutions to this problem, but all were early prototypes and required dedicated hardware with ad-hoc wearable sensors. Being expert with Microsoft Kinect applications, we wondered if it was possible to develop an alternative solution, which required nothing but our body. It was.

On our YouTube channel, you can watch the first results we obtained last fall. The developed solution leverages Kinect for Windows v2 and enables 360° full body tracking of one or more people in the interaction area, without the need for ad-hoc wearable sensors. It lets users moving in a virtual environment in two modes, both naturally walking in the interaction area and walking on the spot, to cover longer distances. As you can see in the videos shot few months ago, the system, even if in early development stage and affected by little instability problems and glitches, was promising. People who tried it already felt immediately comfortable and were able to master the movements in very little time. Everyone, at the end of the tests, commented the experience as "amazing and totally immersive, such to be unable to realize where I was in the real world".

In the last months, we continued the development and improved the solution, by adding new features and interaction modes, for an even more immersive experience. We are currently developing some applications leveraging this walking system and other solutions. What do you think? Would you like to try it? Would you like to buy it for your home? Have you some application idea? Let us know in the comments below this post!