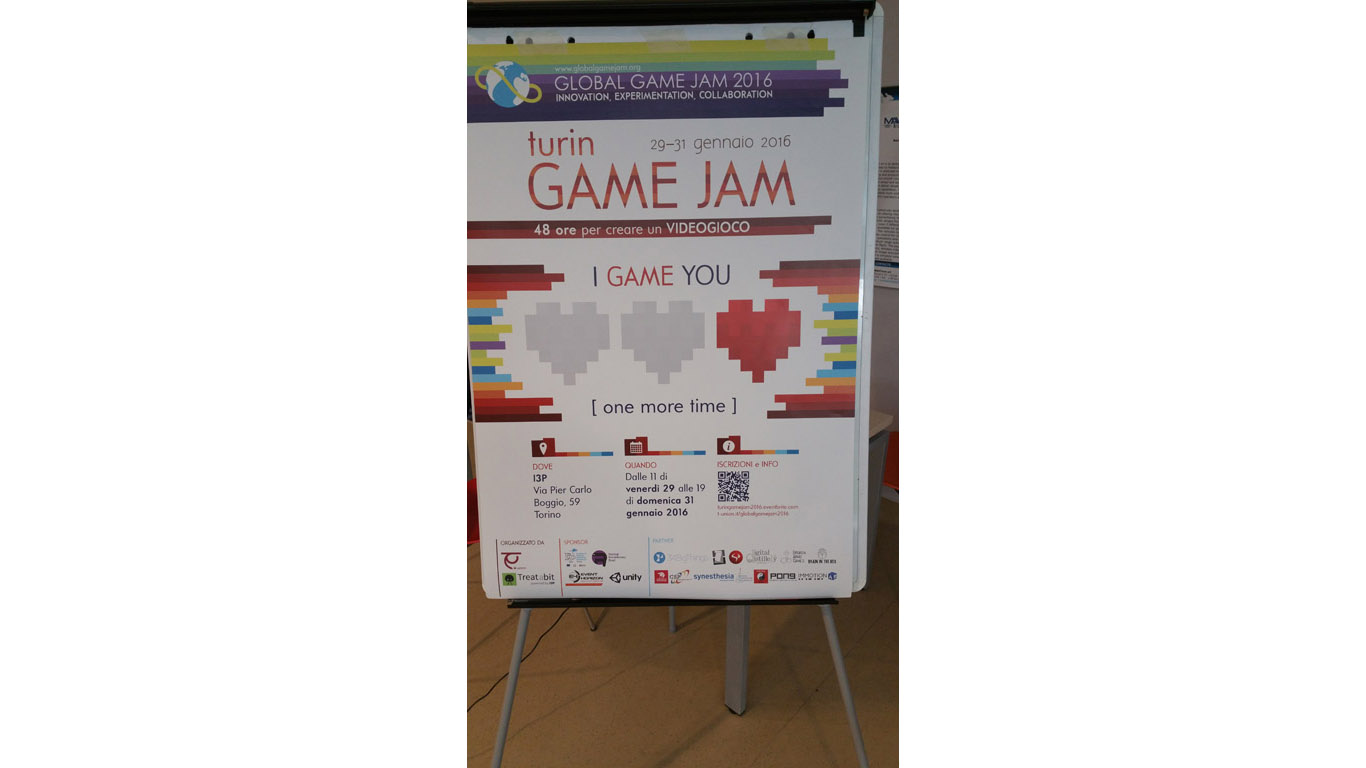 Hello everyone! How are you? Were you missing another post mortem of ours? With that Q&A structure that you like so much? Don’t worry, today I’ll provide you with a brand new one! :-)

As said in this post, we proposed as technical sponsors for the Global Game Jam 2016 event here in Turin (organized by Treatabit and T-union) because we wanted to see what developers think about our virtual reality solution and its related SDK. It has been a truly great experience, so we decided to write an article about it. Ready? Go!

First of all, what is a game jam?

Well, a game jam is a contest where people related to the development of videogames (game designers, programmers, 3d artists, etc…) meet themselves and form groups that have to complete the creation of a videogame prototype in a short amount of time (in this case was 48 hours) around a certain theme that gets unveiled just before the jam start (this year was “Ritual!”… I do not know what it did mean… actually no one did :D). So there is this big rush of adrenaline where people code a lot, eat very few and sleep very bad on the jam location floor. You can find a more professional definition on Wikipedia, obviously. 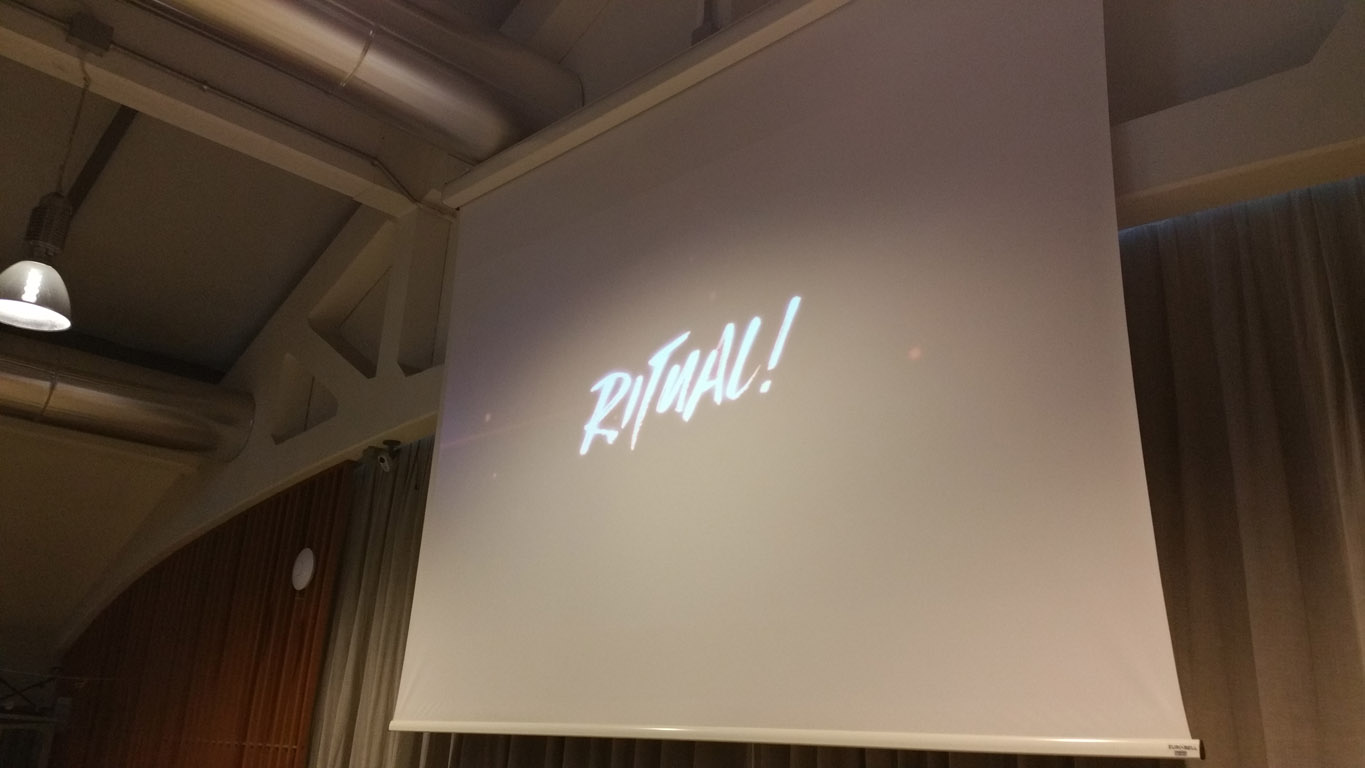 But… why the heck would someone ever spend 48 hours without eating and washing himself just to code a game prototype? What’s the purpose? There must be a very huge prize…

Actually… prizes are not the best part of a jam. There are very good reasons to participate in a game jam: 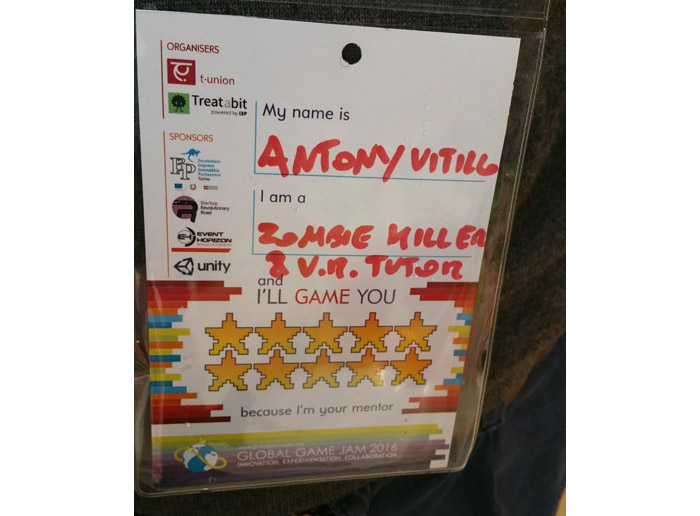 I’ve already read all this stuff on the web. Do you confirm it?

Absolutely. I was skeptical about it, I thought it was just a crazy event with a lot of people coding and a lot of mess… and yes it is a big coding mess, but I’ve experienced myself the beautiful things I’ve said before. I liked a lot the friendly and creative atmosphere of all the event. It was really cool asking people the fantastic ideas they were having, looking at all their prototypes, giving them advices, getting advices from them.

And I’m not talking only about the participants. Also mentors, tutors and guests were great.

My truly sincere advice is: participate to game jams! You’ll really meet a lot of interesting people and you will come out truly enriched! 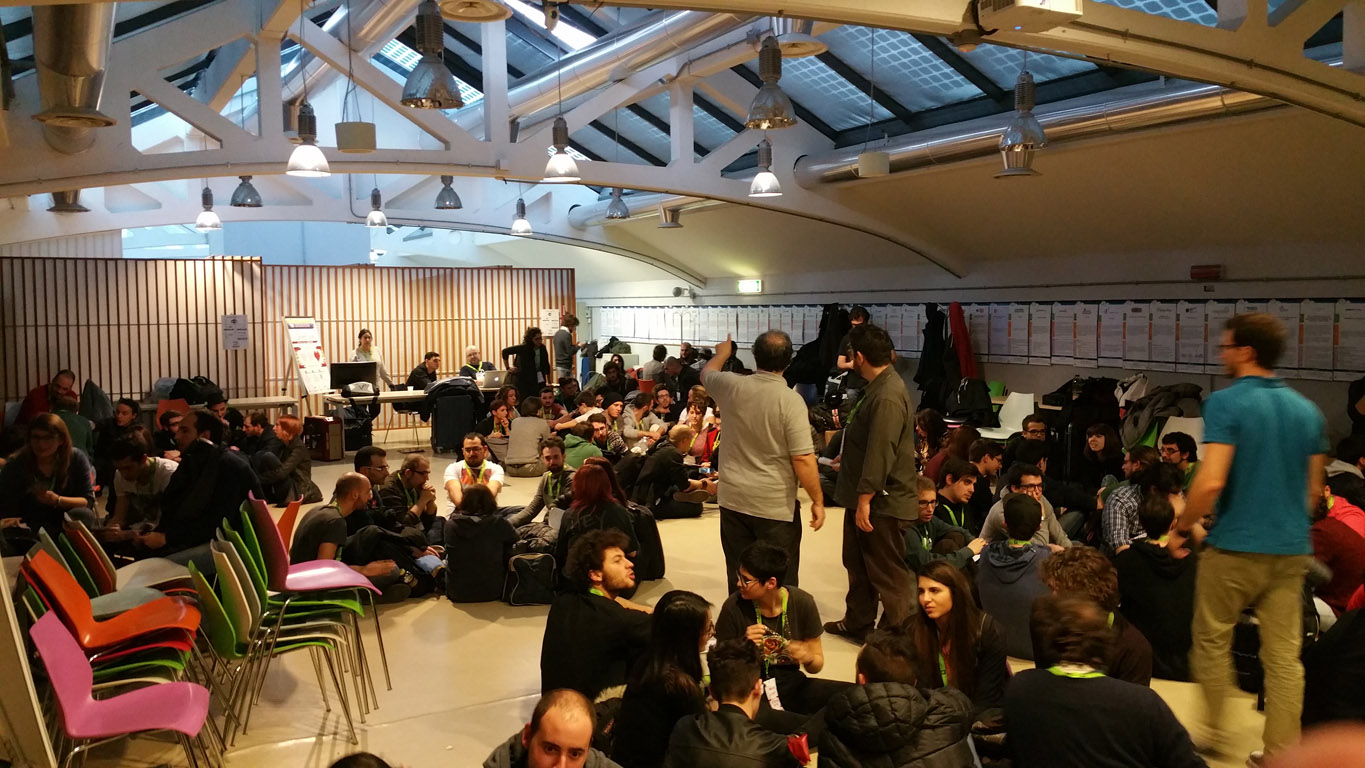 Tell me something more about the interesting people you met!

Well, between the organizers we met very interesting people from T-Union (Marco, the organizer was super-cool), Hub09 (another Marco, another super-cool person), Treatabit (Alessia taught me a lot about communication), University of Milan… and also from Unity! There was Sean, that works on clothes simulation inside Unity! Wow, I use Unity almost every day, meeting a person that works inside Unity Technologies has been like meeting a rockstar for me! And I made him see a video of our ImmotionRoom system and he liked it! Wow!

Among the participants there was a guy that had an amazing idea about a local multiplayer AR game using Cardboard and Vuforia; Gabriele, which tried our ImmotionRoom system and gave us very very interesting and original feedbacks about it… he also created a very peculiar game concept; Massimiliano, a VR passionate guy, which was very enthusiastic about our system, and pointed out about its crucial problems that we must solve.

I hope to collaborate with all this people in the near future!

Cool. But… what was your role inside the jam?

We were technical sponsor. This meant that we offered people the ability to use the ImmotionRoom system inside their game prototype, with our VR mentorship and a virtual-reality-equipped room offered by us. As prizes, we proposed a free license for our SDK and a Cardboard for one of the winning teams. 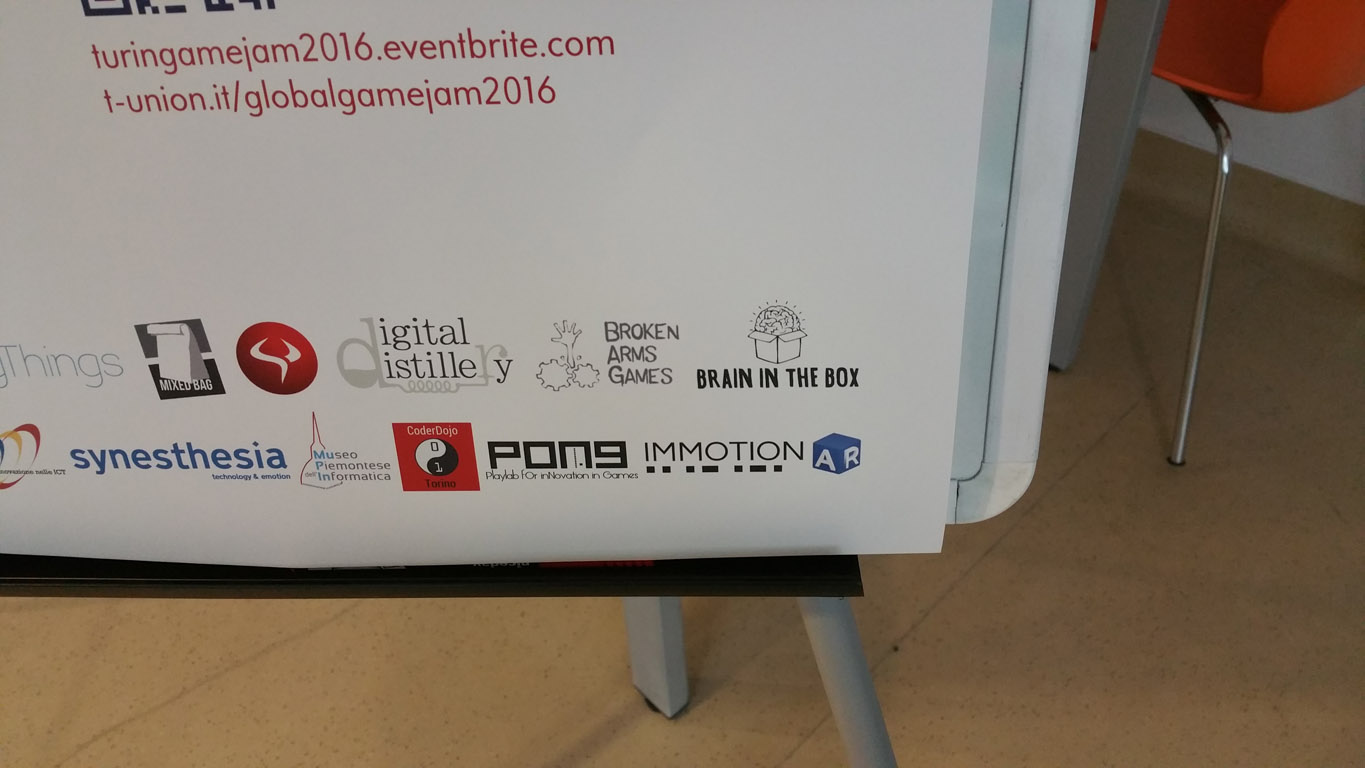 Besides that, we gave advices to guys about AR/VR and the startup ecosystem here in Italy: we really exchanged our ideas with a lot of smart people.

With so little time to develop, were there people so crazy to use a SDK they have never seen before?

We were aware that we were trying something a bit crazy, but we are a bit crazy, so we tried it and we found a guy like Massimiliano that wanted so hard to see our system work with his demo. We have been really lucky to meet him. So, the game of his team, “Kano VR”, includes a scene that is playable with the ImmotionRoom system!

What have been the difficulties of using ImmotionRoom inside Kano VR?

The difficulties where inherent to the game jam ecosystem: the team had so little time, and the obligation to make a game that was also playable with traditional input systems (gamepad in this case). Since the traditional gameplay would have been the one to be played during the showcase, they designed all the game to be visualized on the screen and played using gamepad.

When we tried to insert the ImmotionRoom system, we had to port a classical game to VR interface in so little time (1 hour), that it was almost impossible. We made our best and created an hybrid solution that worked with ImmotionRoom+mouse: it was not great, but it somewhat worked. As always, ImmotionRoom added a great level of immersion and presence.

Here the lesson is: if you want to make a VR game, design it since the principle to be played inside virtual reality with a natural interface. You can’t add it in the last moments, it’s nearly impossible.

Who won your prizes?

Obviously the Kano VR team, the only one so brave to try using ImmotionRoom ;) 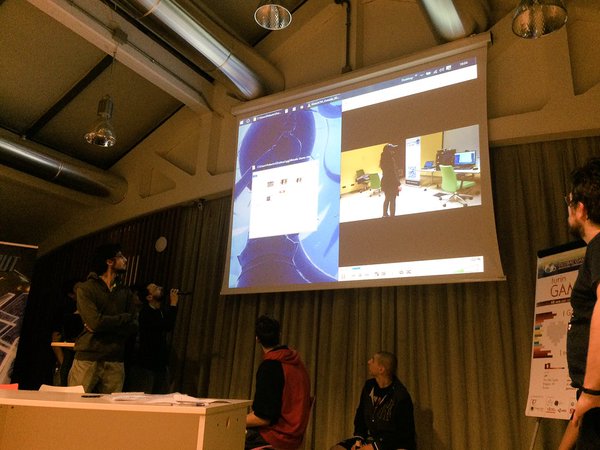 What feedback did you get about ImmotionRoom by the guys who tested it?

As I said, Gabriele and Massimiliano where the two guys that tested our system the most. They both said that our prototype is really cool, but we have to absolutely perform a better hand tracking and give hand opened/hand closed triggers. We care about devs opinion, so we have put these things at a higher level in our to-do list for the next releases.

We thought that we could insert this feature later in the future… and that’s why it is so important the lean startup model: you have to make a prototype, make your potential customers test it, correct it accordingly to the feedbacks and re-iterate. You have to listen to your customers, you can’t decide features they will like by yourself.

Have you made a public speech about your system during the event? How did it go?

Yes, it was my second public speech! It went good, I was more relaxed than last time and I tried to capture the attention of the developers that were in front of me. I’m a developer, so I know what I’d like to hear and I tried to say it to the other devs. Remember that you have always to tailor the pitch to the event and to your public. 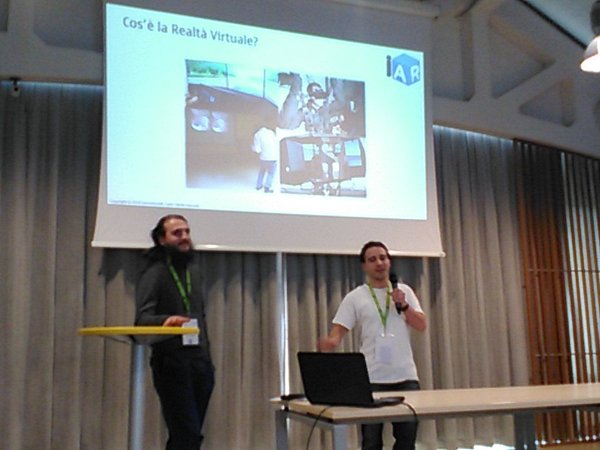 I remember from your last post-mortems that every time you have an exhibition or similar, you find a new bug in your system… how about this Global Game Jam?

You remember really well, we had strange bugs at WTT and at Wonderlight Night. Well, I can say that this time was different: Saturday morning we had BAZILLIONS of bugs that strangely popped out: the most remarkable of them was that the player in the game was in always-go-forward mode, so there was no way to stop the virtual avatar from running! It was terrible. It took us hours to solve all these problems.

And when at the end of the jam we called one of the judges to test the VR integration: a new bug in the integration came to light… :-(

The curse continues, we need some kind of exorcism, I think.

What are the things that you liked less of this event?

What you liked most?

Almost everything else, in particular: 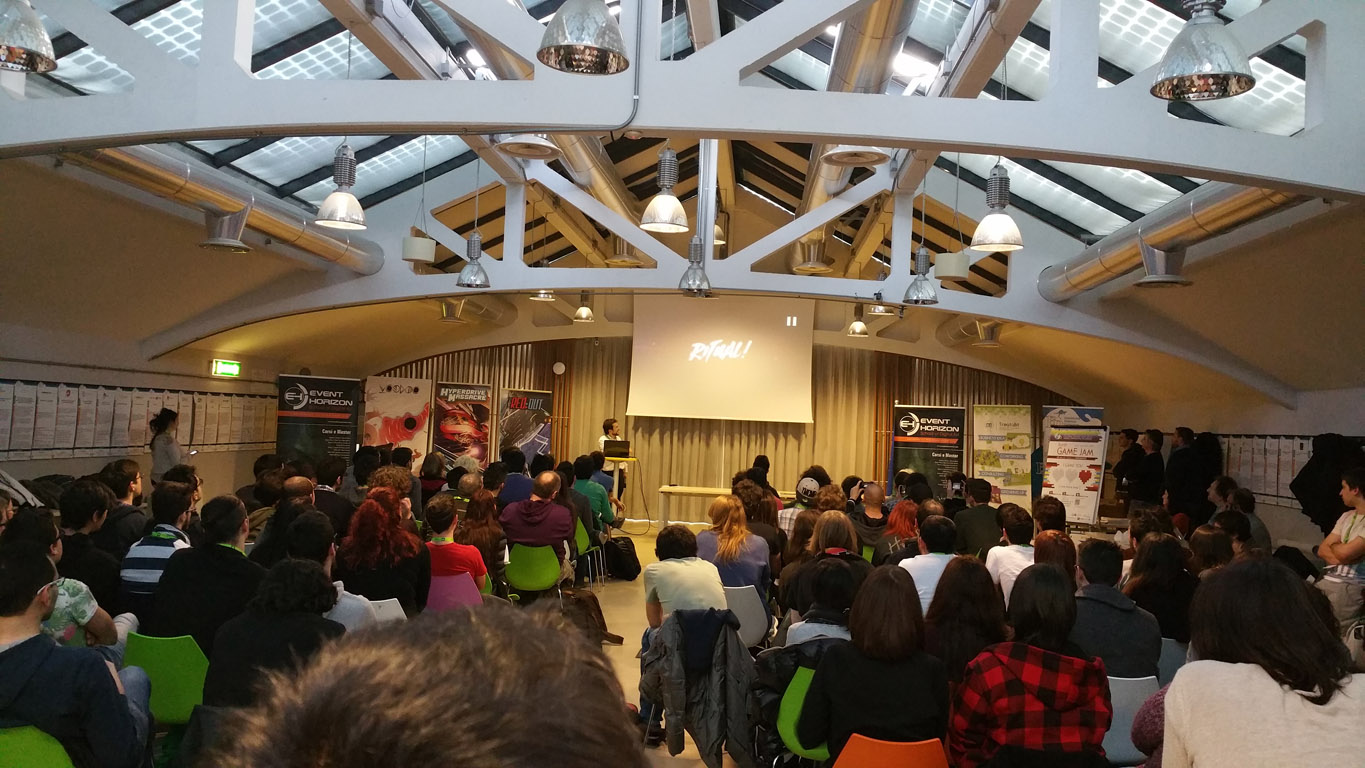 The Global Game Jam has been a truly great experience and I want to thank you everyone that was involved in it! I advise you to participate, with any role you want to the Game Jam that is next to you, because… yeah, it’s cool!