My experience with Razer OSVR 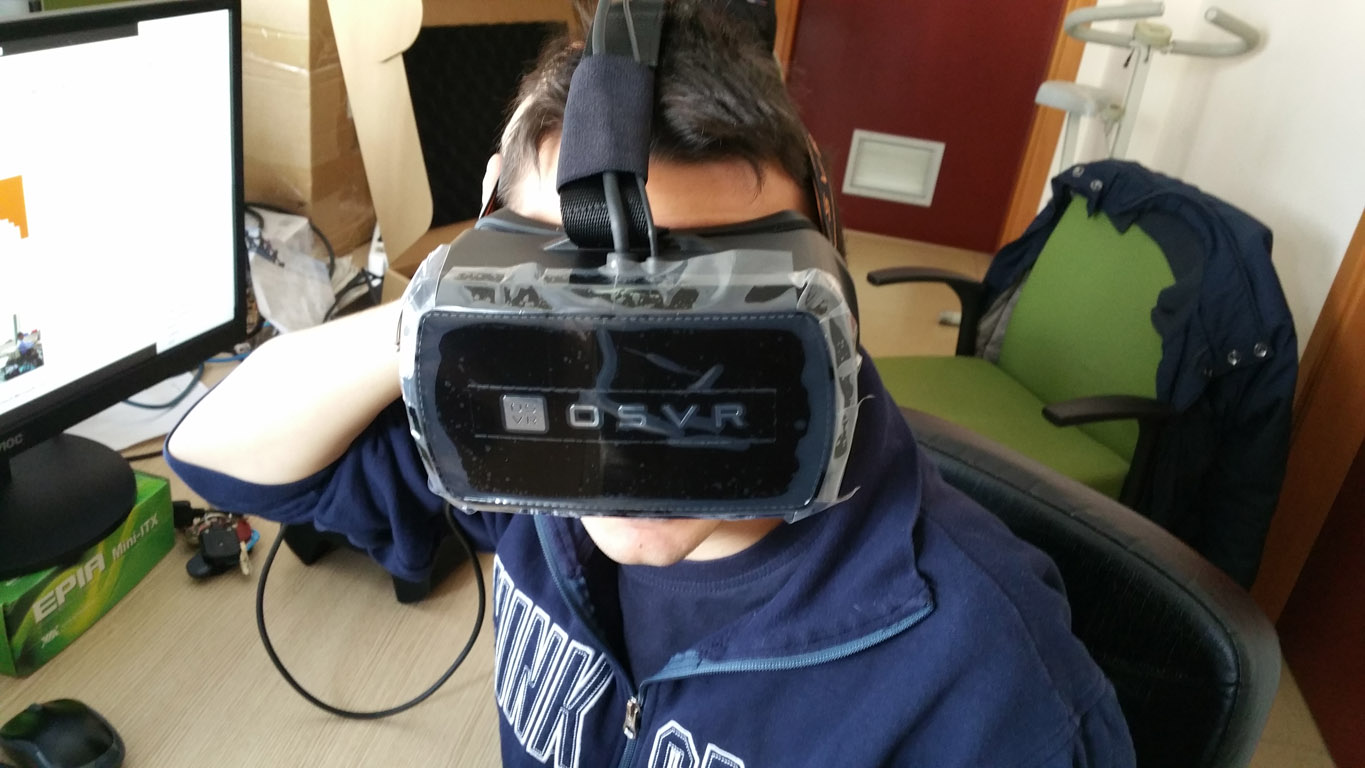 Hello everyone! Today I’ll write a (long) review about my (short) experience with Razer OSVR, because I think there is so much attention about Oculus Rift and HTC Vive that we often forget that there are lots of other headsets here in this world. So, I’ll write a bit about OSVR. Ready… go? (If you’re in a hurry, read only the TL;DR at the end ;) ).

What is OSVR? OSVR, Open Source Virtual Reality, is a project by Razer (yes, that company that makes cool controllers for gamers) with the idea in mind to create an open source environment for virtual reality. The environment consists in two parts:

Ok, now you know what OSVR is and how great is its philosophy… but, how we obtained it? We asked Razer to take part in their partnership program and integrate OSVR inside our ImmotionRoom system. We asked this because our system is really a nerdy thing to set up, so it is compatible with the HDK philosophy :-). They were really enthusiast about this idea, and so we are now OSVR Partners and have a received a free HDK 1.3 (I love free things!). I must be really thankful towards Jeevan and Marquis of OSVR marketing office, that have been really gentle in helping creating this partnership, despite all the difficulties we had (custom office, strange Skype behaviors, ImmotionAR servers going down, etc… this partnership looked like doomed!). You know, we are partner, so you’re thinking this review is a bit biased (and I admit that in some parts, it could be), but I think that being partner means telling all the good and all the bad about a product, so to help in making a better product, so I’ll try to be as sincere as possible.

When the HDK arrived, we were really excited and we started the unboxing operation. I tweeted a lot about it last week (you lost my tweets? NOOOOOOOOOO, such a shame! ;) ). Here you are some photos: the box is made of cardboard. 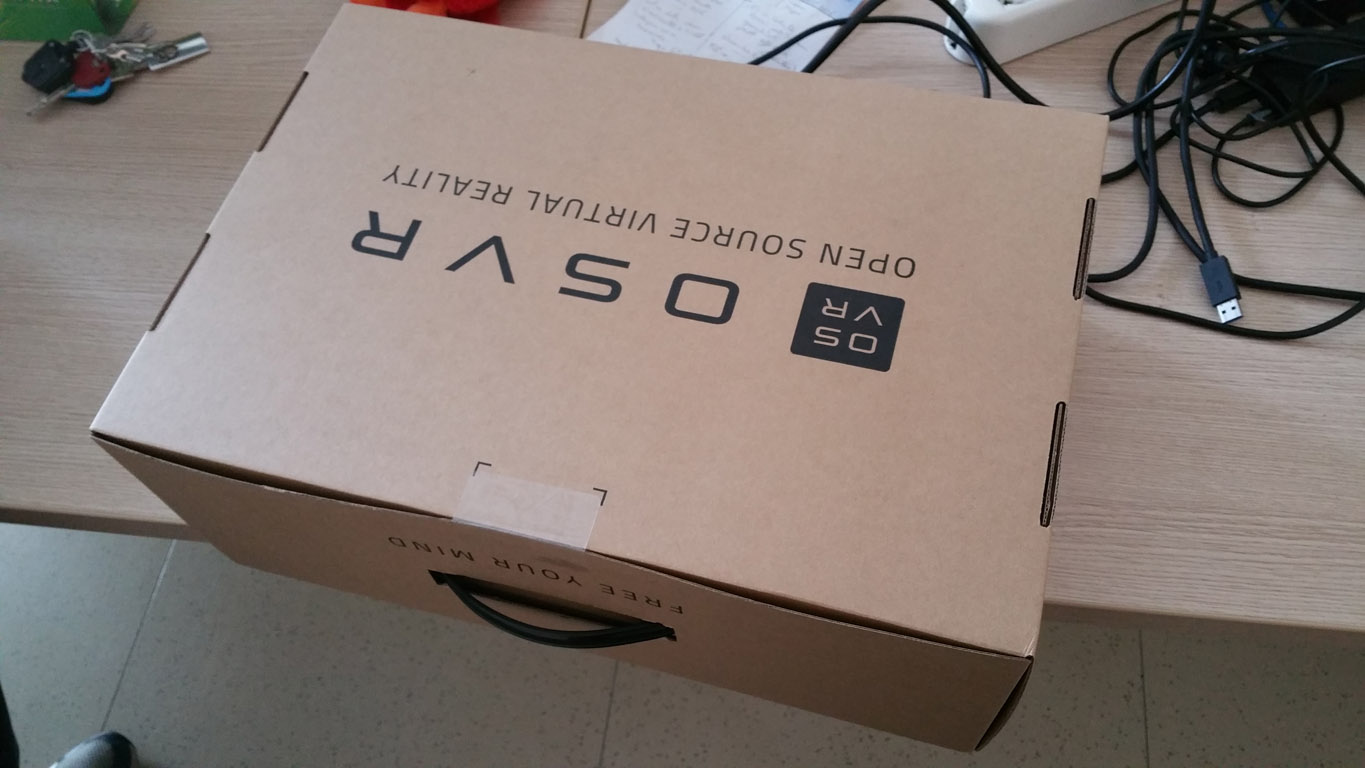 And it is really elegant inside: 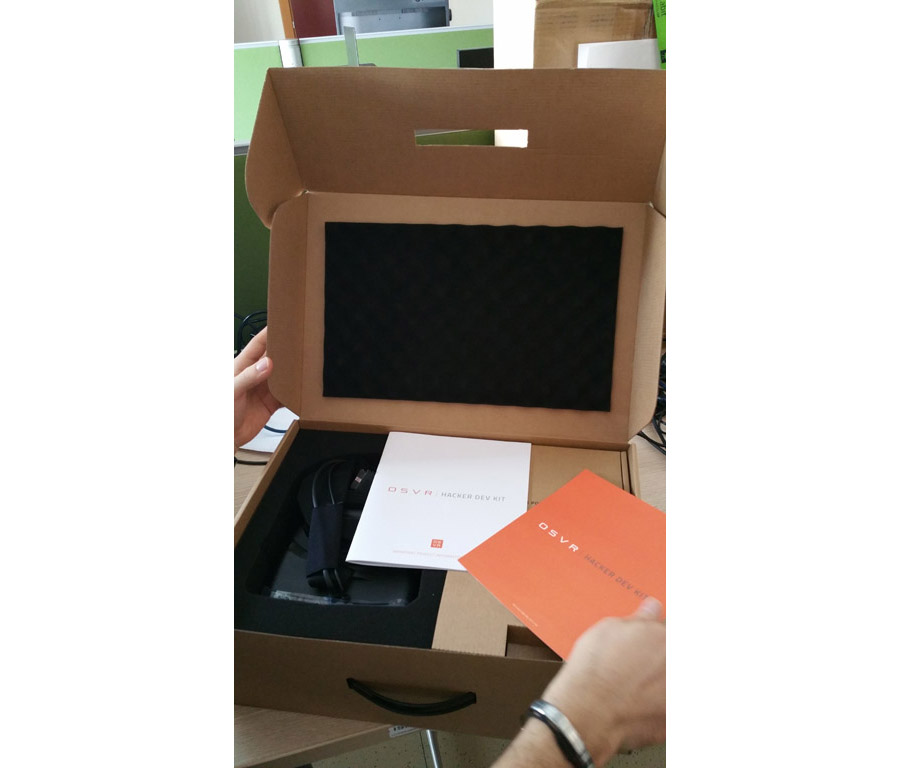 where it contains the headset, 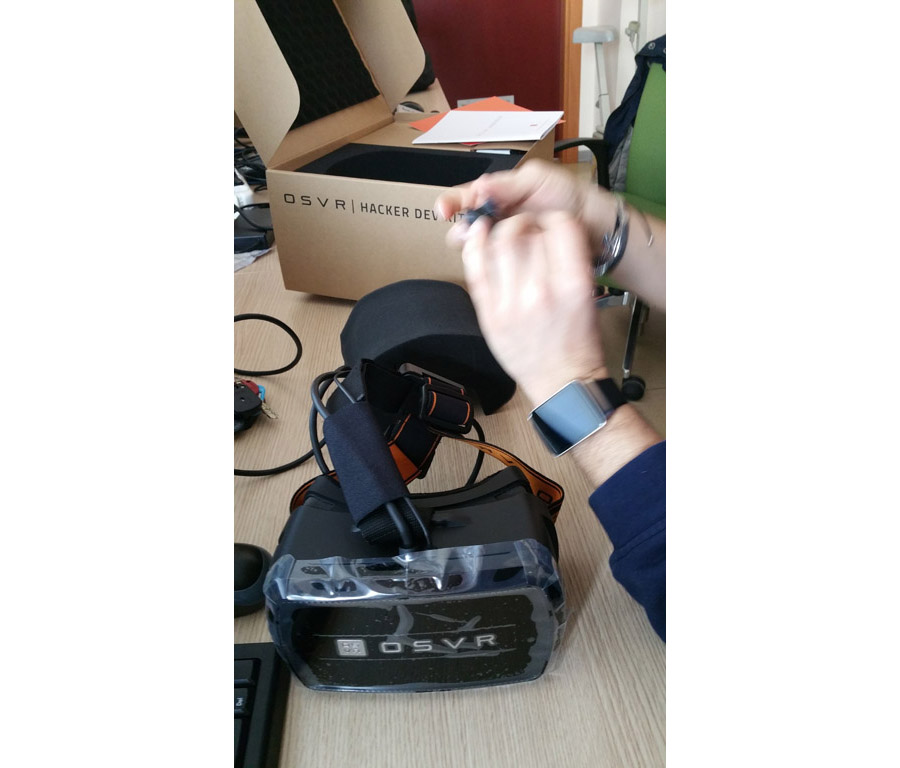 that, despite the fact that is disassemblable, seems very solid. I like its design more than the one of the Oculus DK2 and the orange gives a colourful touch that I personally like.

Then there is the positional tracking kit, with the IR camera and its very interesting stand, that lets you put the camera onto your screen or on the desk just bending its legs: 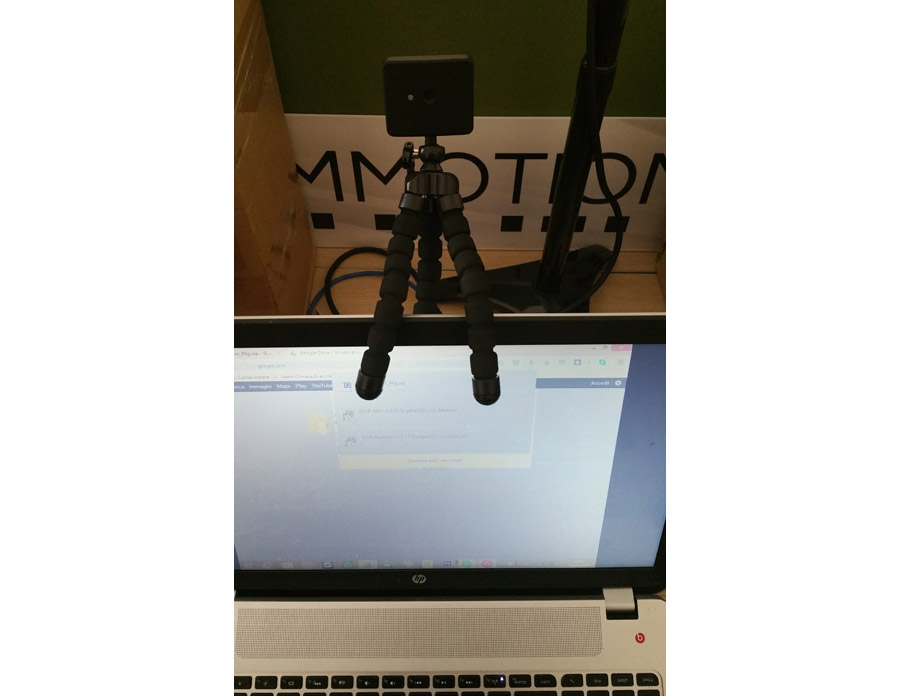 Then there are lots of accessories (cables, adapters, etc…) to connect the device to the electricity and to the PC (I’ll talk about them in a while) and then there is this cute air-blowing brush to clean the lenses (I think it is the cuter lens cleaner I have ever seen in my life): 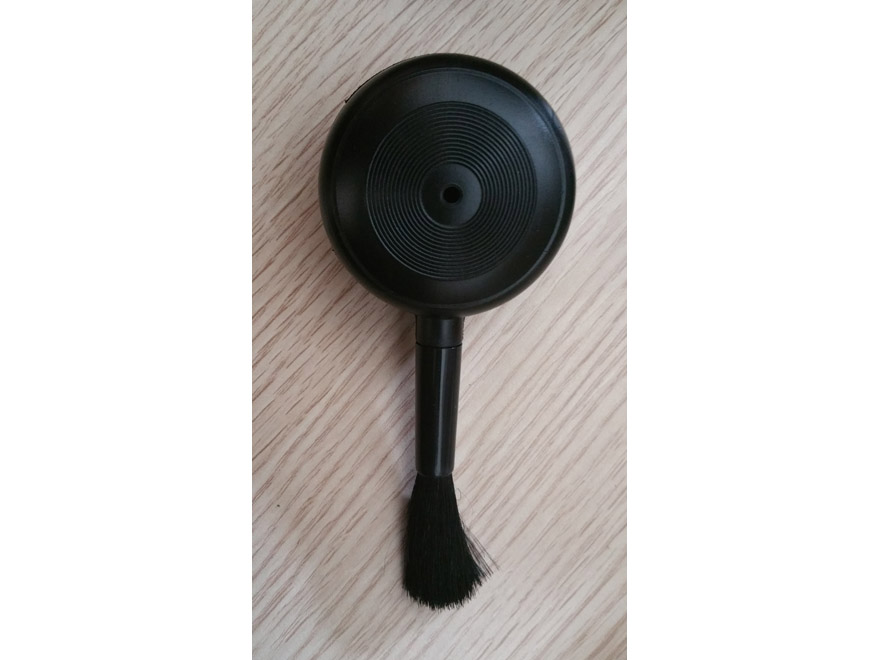 Then some piece of paper with security concerns (no one ever reads it, we all know) and the instructions to assemble all!

I started assembling all… and with the assembling operation the first problems begun. Assembling Razer OSVR is not super-easy and straightforward. I mean, if you are an IT guy, it’s OK, but it requires more time than expected… the first time you perform this operation, you have the impression you are mounting an IKEA bookshelf… I can’t imagine my mother assembling it: it’s just impossible. This was the mess of my desk while trying to mount it: 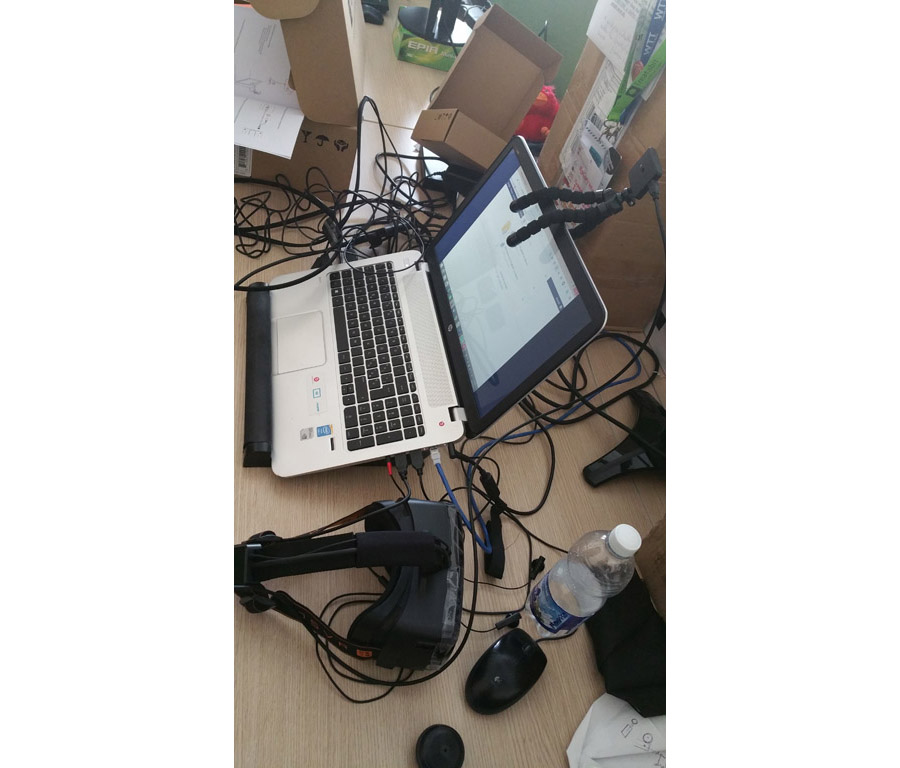 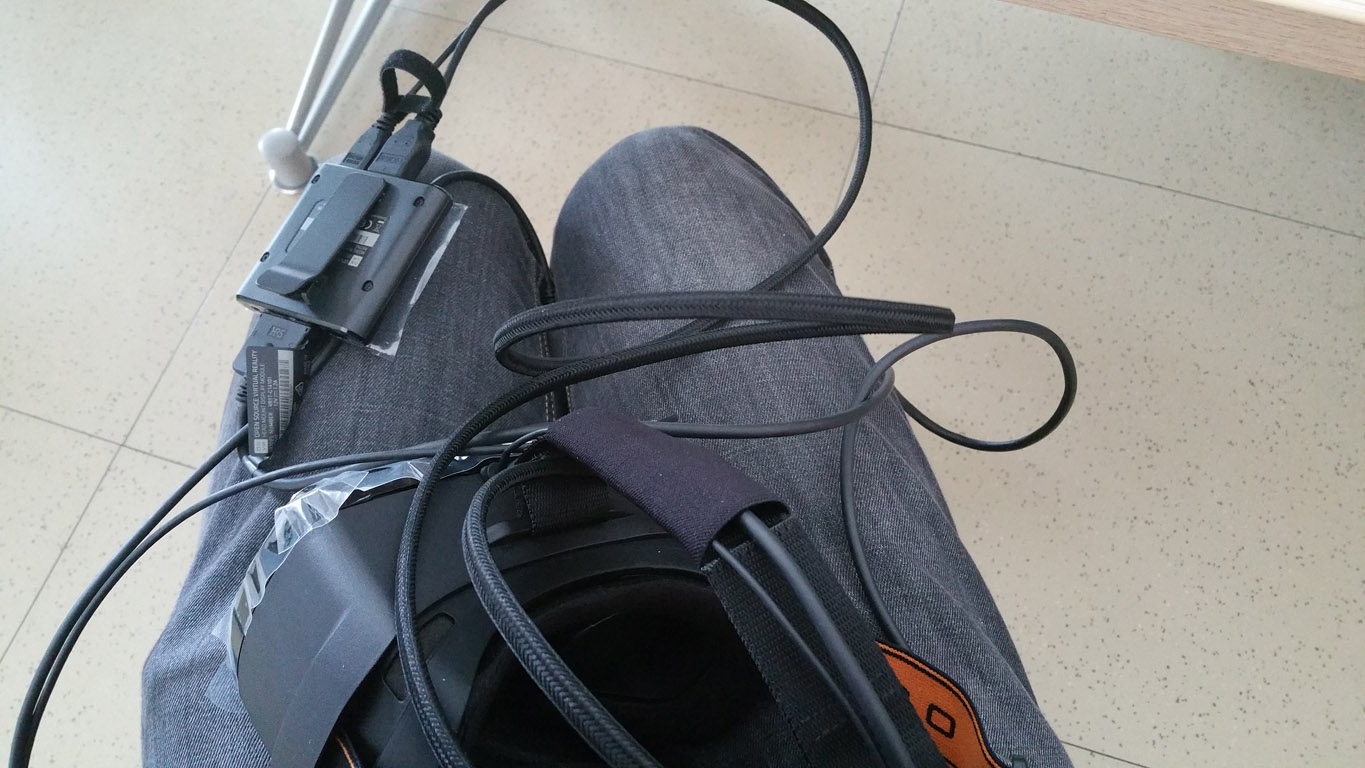 It’s also a nuisance that everytime you want to go away from your PC, you have to remove the damn box (and if you forget this, the risk is that you make everything fall to the floor). 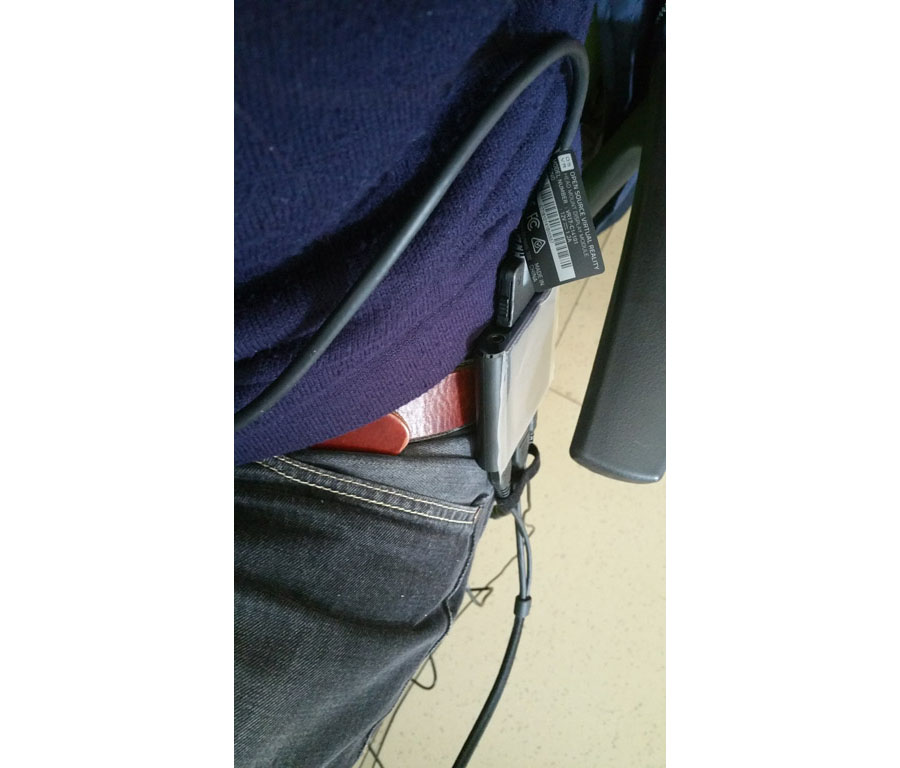 So, about the hardware, my opinion is that I like its design, but Razer has to work a lot with ease of use and assembling. The device should auto-aliment itself through USB port, and the damn belt box should disappear.

OK, ready to try the device. 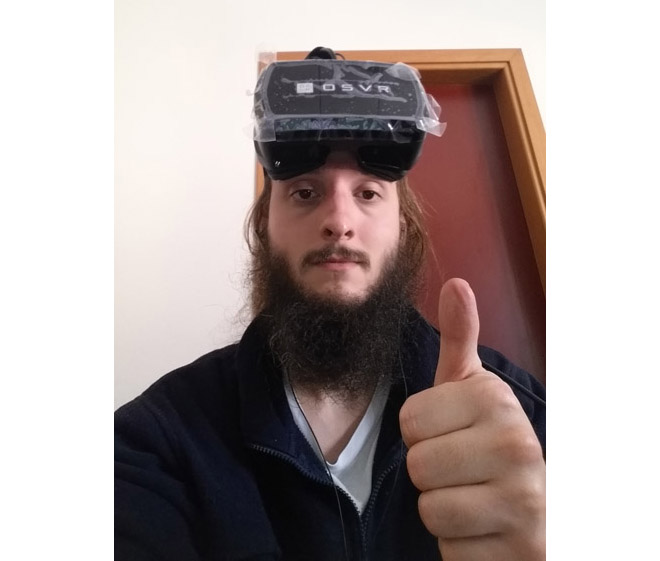 When you wear it, it seems quite comfortable and the nice thing is that, at least for me, it closes completely yourself from the world around you. No holes near my nose, I can’t see a thing of my desk, and it’s cool for immersion. The bad thing is the lens regulation mechanism and the area of the HMD near the nose: it really hurts my nose a lot. I tried to loosen the HMD, but it was useless: I still have a red spot here on my nose because of OSVR o_O. And lens regulation makes the lens cylinders to move against my nose, so it’s even worse. So, OSVR guys has still to work to make the chassis more comfortable for the nose zone of the user (at least for people with a nose like mine).

Time to try some games! Well, but where to find them? OSVR gives you links on where to download content for their headset. I found very useful the links to the VR sharing platform WEARVR, where I downloaded games like Mental Torment 2 and Dreadeye; on itch.io I downloaded Mythgreen-vr, the demo onto which I made a lot of experiments with the osvr_server. 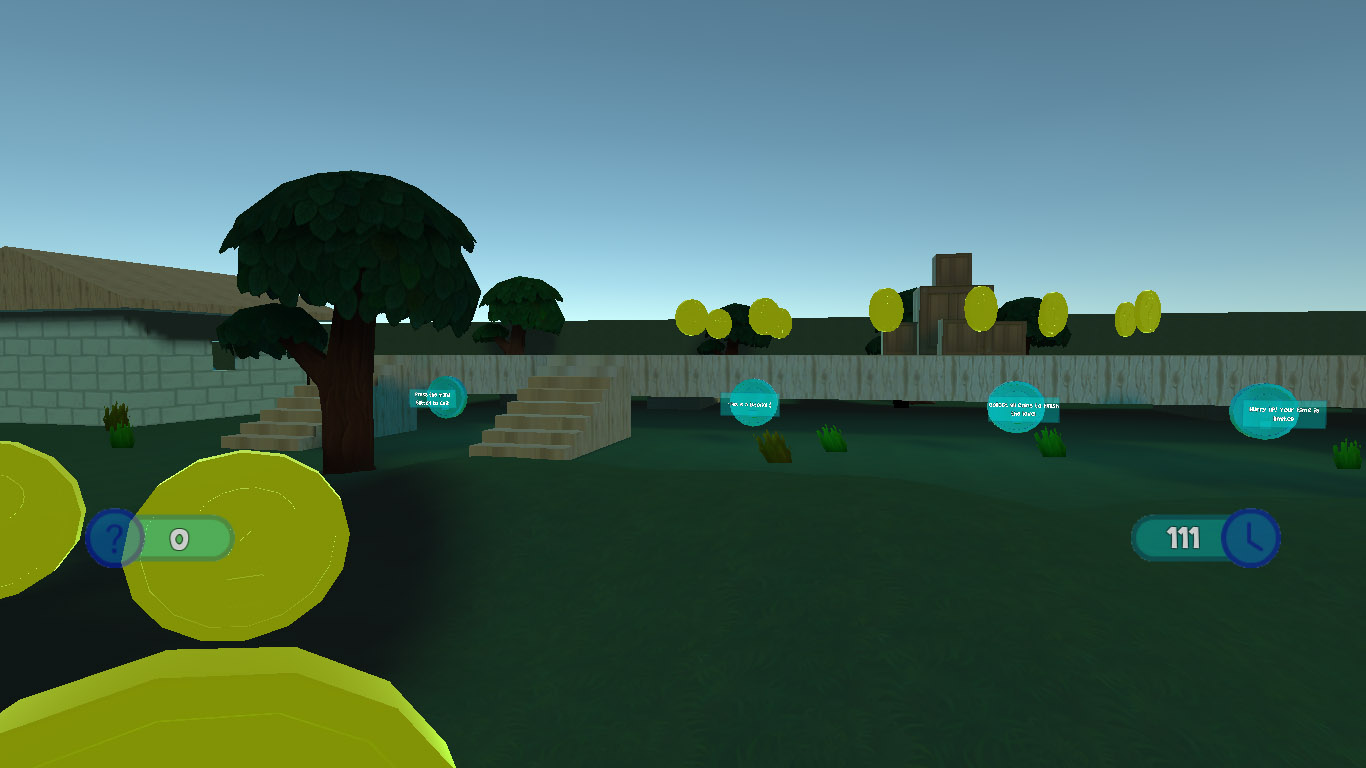 Obviously I also tried the Showdown VR demo. Let’s admit it: at the moment you won’t find lots of games for OSVR and surely not the most advertised AAA games for virtual reality, but you can find some interesting titles and have some time of fun. Dreadeye is really scaring… I love horror demos in VR (I’m the developer of The Time of Conundrum demo, so obviously I love them). This is, in my opinion, the biggest problem of OSVR: there is not that great number of available games out there, and so there is the famous chicken-egg problem: no games, no players; no players, no devs; no devs, no games; loop.

After have downloaded some demo, I realized I had to download the OSVR services installer, so I went to the download page and saw all that bazillion links (drivers, runtimes, SDK, etc…) on that page. After a little WTF moment (seriously… why do you not provide a single installer??!), I downloaded the SDK, run the first game and… nothing worked as I expected. Because I discovered I had to start the service by hand (seriously???). So I started osvr_server.exe and… nothing worked as I expected the same. So I installed the RenderManager, the Windows Driver Pack (why there is not a single installer ??!) and… nothing worked as I expected nonetheless. I searched on the web (found links like this and this) and… cough cough, you know. I’ll cut you two-three days of getting mad to make my headset to work properly… and I’ll explain you shortly how things work. OSVR provides its service that lets you use virtual reality in the way you prefer: it is highly customizable (extended/direct mode, portrait/landscape, distortion parameters to make it work with all headsets, different trackers support, etc…) and to customize it, you have to pass to it as a parameter the path to a JSON configuration file. It is absolutely a non-user-friendly but very-powerful tool. This means that if something does not work, you can get mad with all its configurations. So, in the end I managed to obtain two possible configurations:

I solved using a hack: I take the second configuration (extended mode, because direct mode does not work for me), then move on my laptop screen the black window of the builded application, while moving on the HMD screen the split screen for VR, then give focus to the all-black window and insert input there while watching the other window (a bit insane, I know, but it works). In this way, I managed to try all the demo.

If you are thinking that OSVR is cr*p because of this, I have to say you that I have similar problems with Oculus DK2, too (direct mode not working, strange hacks to make the demos work properly, etc…). Maybe it is my laptop that is doomed, who knows.

And I have to say that the single installer exists. If you have a non-doomed PC, when you insert the HDK the first time, a pop-up will tell you if you want to install the runtime and will guide you in its configuration (this actually happened on my buddy’s PC). If this popup doesn’t popup, my piece is advice is to use Razer Synapse that, if updated, will install the configurator when you plug in your device. Pretty cool, because it can also install you a osvr_server service that runs on startup for your pc. But… on my laptop the installed service had not the right settings (it is doomed, I’ve told you!), so I reverted using the manual files. Anyway, before doing anything, I advice you to give a look at the OSVR documentation. Razer & Sensics are on the right path to make something more user-friendly. 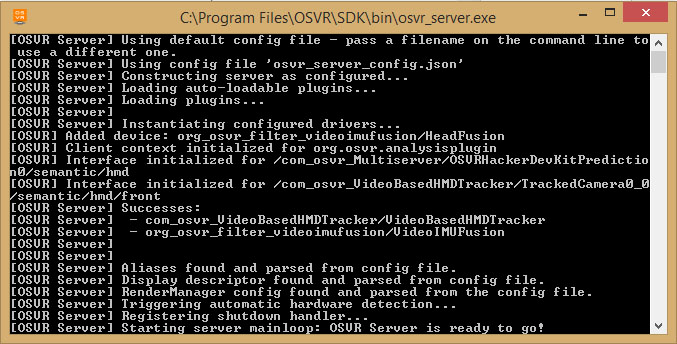 How about the headset inside the demo games? Well, to me HDK1.3 is like a Oculus DK2: screen door effect, limited FOV, etc… I found it a bit slower to react to head movements and more distorted near the lens edges, though… it is something that must be fixed in future updates. The positional tracker has higher range than DK2 one.

As a Unity developer, I downloaded their Unity package and read its documentation and tried the sample Unity Palace. The Unity integration is coherent with all the rest of the OSVR software: super open to customizations and integrations (there is already integration for pupil trackers!), but with the easy-to-use prefabs we VR developers need (like the VR First Person Controller). I found it nice to use. You have to use Unity 5.2 or above, or something will not work. I had problems with their plugin with my laptop (you don’t say) and I couldn’t see anything on the Game window while developing (in build I had no problems), so I had to force the Show Direct Mode Preview to see something in the Game Window. 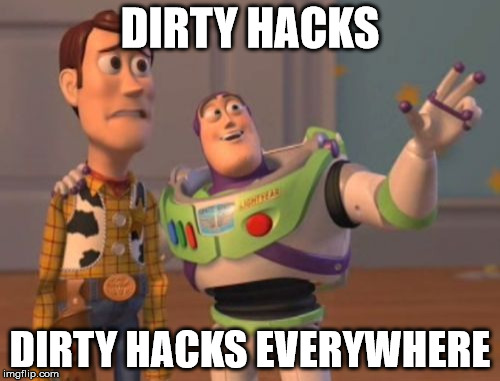 But, as I have said, this is quite normal with dev kits of a new technology like virtual reality.

I was able to integrate OSVR inside ImmotionRoom quite easily (it took me half an hour), so I can say my experience with their Unity plugin was positive. I’m very happy that now our system supports OSVR, too! Look at this screenshot! 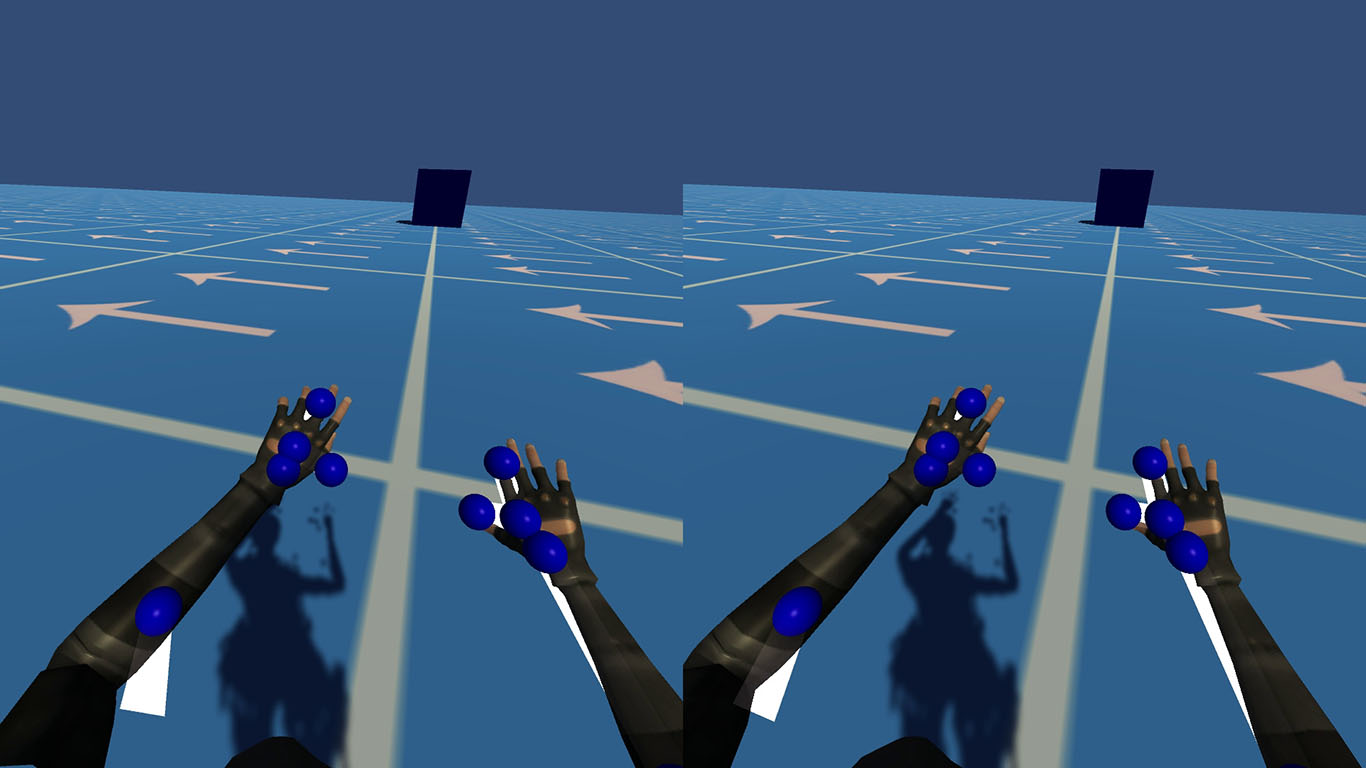 That’s all for my first OSVR experience!

Any last word? I like the philosophy of OSVR and hope that this product will follow its roadmap and that it will become a valid alternative to Rift and Vive! Come on, Razer guys! 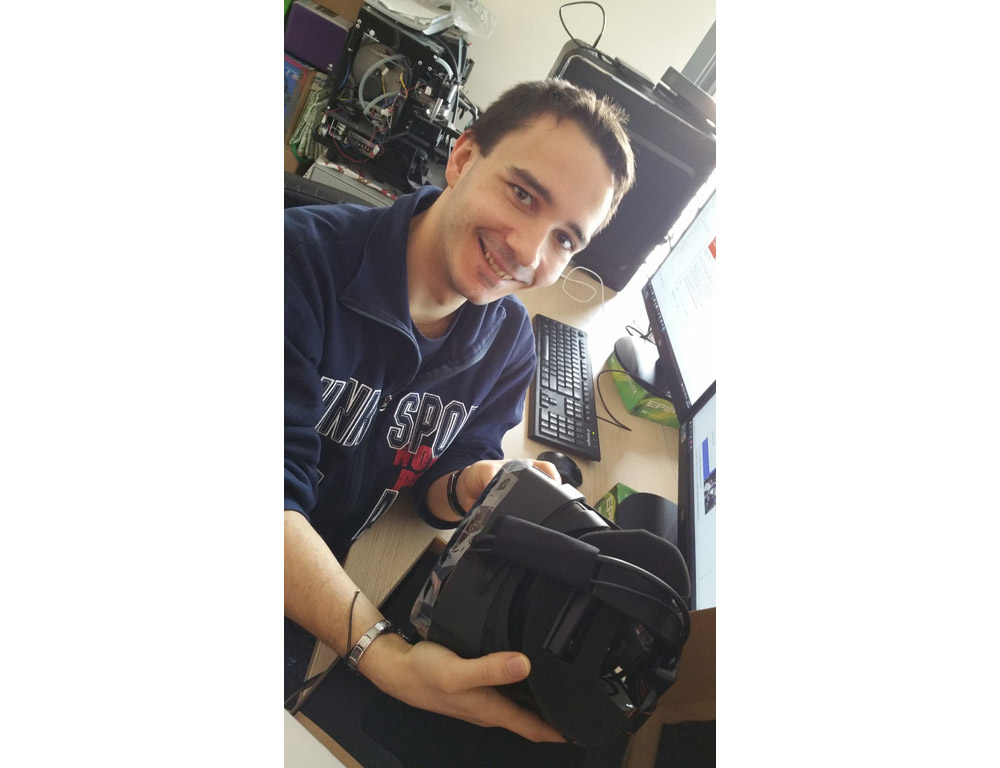 OSVR is Razer full open-source headset. It is really cheap (299$) and offers Oculus DK2-like features. It is not a product for consumers (it may need some expertise to use it and configure it) and does not use cutting-edge vr technology. There are not many games for OSVR and surely not AAA games. But it has a great philosophy and it is highly customizable. Buy it if you are a maker or a nerd; if you use a lot Mac or Linux; if you need a system completely open so that you can customize it; if you have few money but want to start VR development anyway. Don’t buy it if you are a gamer that wants to try cutting-edge technology with AAA games.