We’re happy to announce you that on January 6th, we have pre-ordered 2 Oculus Rift CV1!! They’ll arrive here in April, and we can’t wait to play with them! You know that we’re virtual reality enthusiasts… so you can imagine how curious we are…

The preorder moment was really exciting: it has been like purchasing the tickets for the concert of a big rock star, like U2 or Bruce Springsteen. We were all waiting for the beginning of the preorders at 5.00PM, looking at the countdown present at Oculus website. When time went to 0:00:00, the “Pre-order” button appeared and I immediately clicked at it, eager to see the heaven of the Oculus shop. Instead I just saw… nothing. Oculus website had huge problems and we all managed to see only a white page! So we all went to twitter-spamming Palmer Luckey about our problems… and in the meanwhile we continued clicking F5 on our browser page hoping to see something more than that blank.

After having destroyed the “Refresh” button on my keyboard, finally the shop popped up. 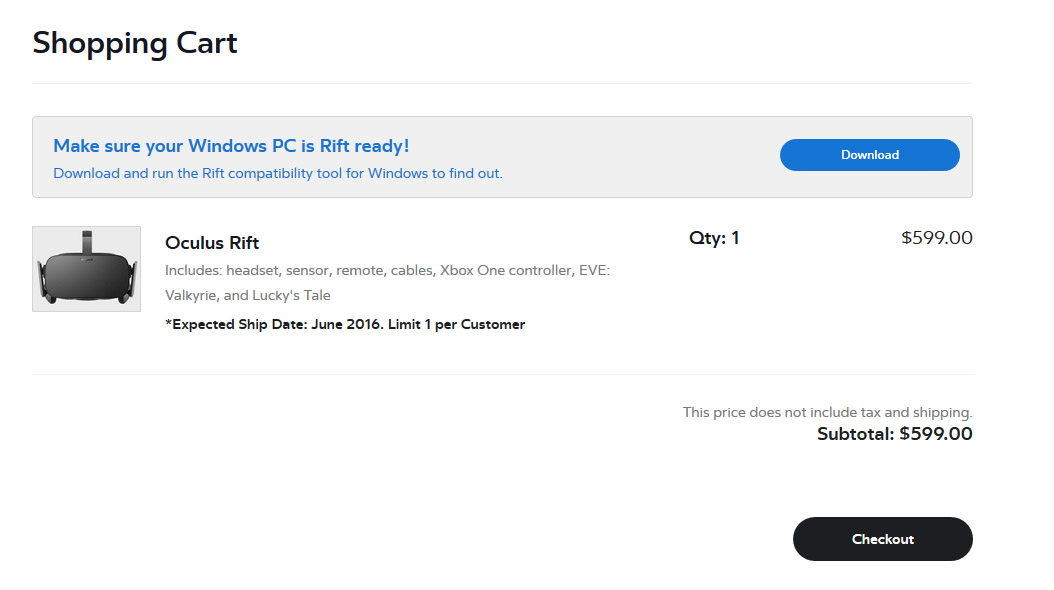 I don’t know if I was really happy, because I discovered that Oculus price was 700 EUROS!!! (+42 € for shipping). I almost had an heart attack and visualized my future self living in the streets and begging for money because I spent all money for virtual reality hardware. The funniest part was that the price visualized was 69900 €… so it seemed to cost as much as an apartment! Fighting with myself I completed all the operations to buy and… nope. Website had errors with payments and showed “an error has occurred” message. So, everyone went back to twitter-spamming Luckey (not that Lucky, on that day), who answered the anti-fraud system was rejecting a lot of European credit cards (or maybe was the future me trying to make me save some money :-) ). After several tries, finally the system accepted my money and a confirmation mail said me my purchase was confirmed! I’ll have my brand new HMD on April!! Woooohoooo!!

A final personal notice on the price: it is way too high for virtual reality mass consumption, so in my opinion mass VR will happen in 2017 and maybe 2016 is just the year of VR for business. The price has also caused a lot of rant comments on the social networks… on 9GAG a lot of satirical post like these ones (post 1, post 2, post 3) showed up.

And you? Have you bought your Oculus CV1? Let us know in the comments!