Hello everyone! How are going your holidays?

We have not had so much time for relaxing, because we decided to participate to the Wonder Light Night exhibition in Bardonecchia, Italy… so we had to work during the holidays to prepare for the event: we fixed some bugs and make improvements to our demo, prepared all the documents to handle the customers queue and organized all the stuff to be ready for the demo day.

This was our second exhibition, so we were prepared to handle a similar event: if you remember, we had the first exhibition more than one month ago: it was the Wearable Tech Torino and there we learned a lot of things, as I explained in the relative post-mortem.

I like to write post-mortems using a Q&A structure, as in a fake interview, so I’ll make this article in the same way. Hope you’ll like it :-). Ready? GO!

Ok, so this was your second exhibition… what have you improved in this demo since the last one?

Actually, a lot of small things and some important major ones. The most remarkable improvements were:

I remember you had a lot of queue and time management problem during the WTT. Have you made any improvements to solve them?

Yes, we planned queue time management: every disclaimer people had to sign to try the demo had an ID number pre-printed on it, with an estimated demo access time, so people could just register for the demo and have a precise time at which coming back and try the demo, without staying in a long queue. Then we prepared an interactive spreadsheet to compute the estimated time for each user, completely updatable at runtime.

Last but not least, we added temporization to the demo: the application had a predefined time written in a file to specify how much time the user could play inside the virtual world. The demo displayed alert messages at certain intervals to specify the remaining time and after two minutes made all the screen black to signal the end of the demo. This was a great idea to have precise timing for each user trying our system.

Great! There was something you were worried about?

Of course. In particular, this exhibition setup was completely different from the last one: it was an outdoor event, with non-technical people attending it, not in our city and with no days before the event to try our booth and solve logistics problems.

And then… our Oculus Rift DK2 is an old device that has been used a lot and it starts showing a lot of malfunctioning: we hoped it wouldn’t break completely during the event...

The 4th of January was the great exhibition day. How was your preparation of the booth?

Well, not that good. Due to bad weather during the night, event organizers were late in the booth setup process. So we had to wait 40-50 minutes before beginning our booth preparation. After that time, we could begin putting devices in their position, but there was still no electrical power. And the booth had some unexpected problems: 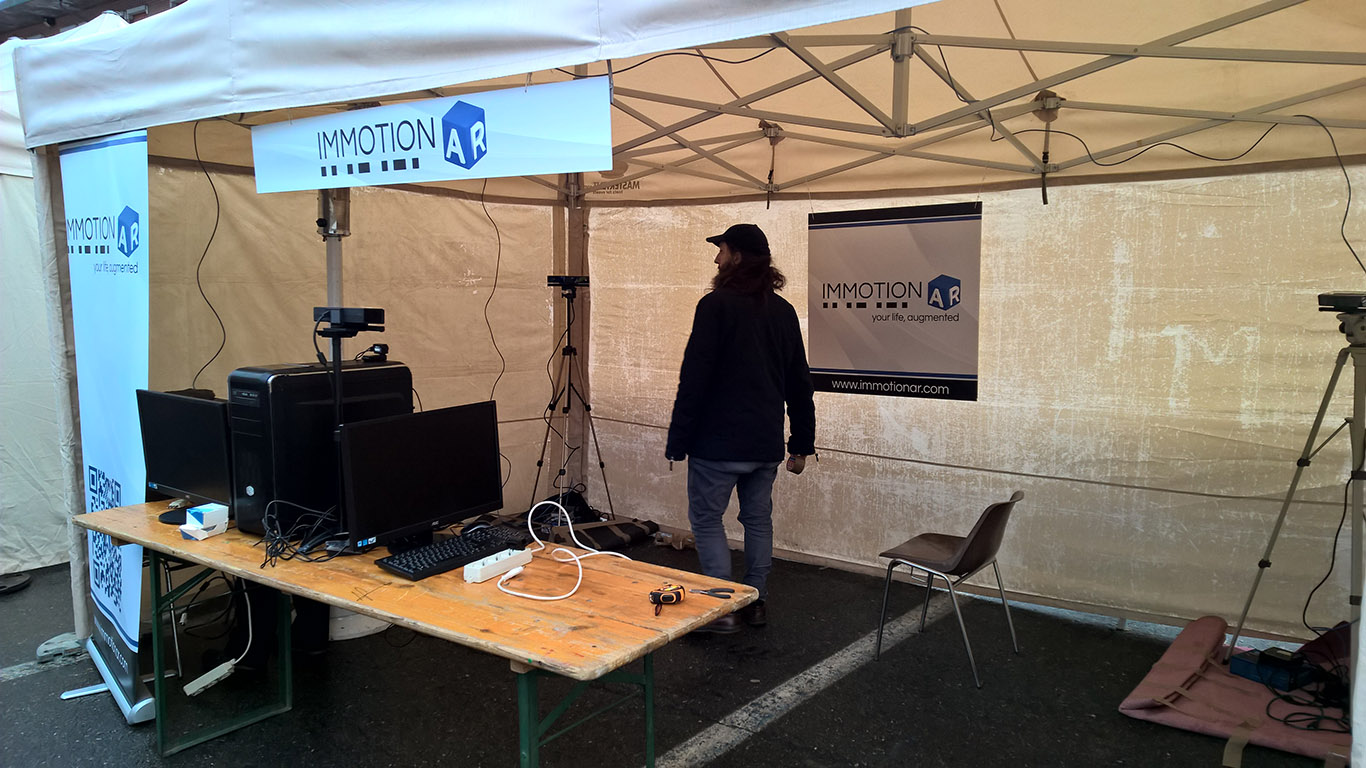 Conditions were critical, but we made it: tracking was not perfect, but it worked. The system was up and running by 5:30PM. 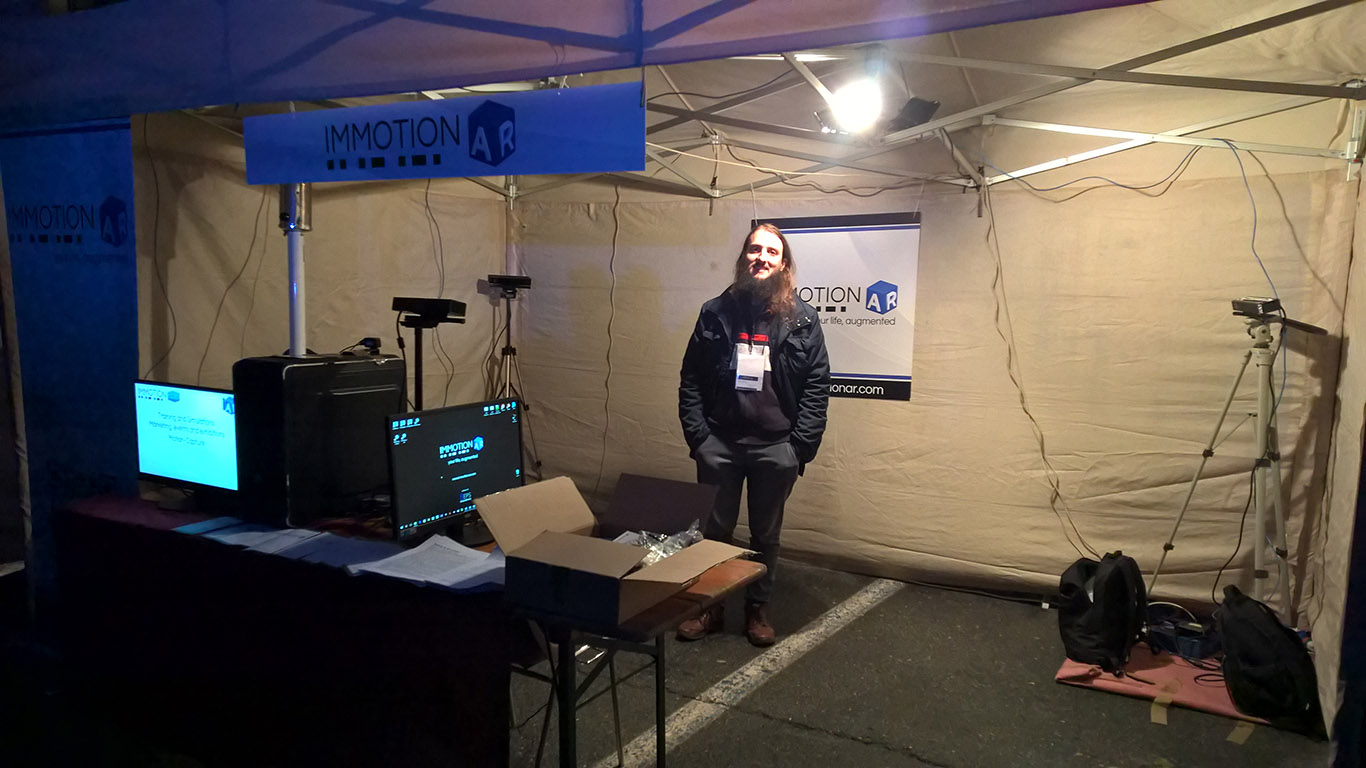 And we must thank a lot the organizers: Davide Giordano from Jetop and Roberto Rosati of Lucas were always helpful for every problem we showed them.

The lesson here is the same of WTT: be prepared that something will not be as expected and that you have to find workarounds to make everything work.

No, it was very different. It was an outdoor event, so at first it was cold :-)

Then there were few people: Bardonecchia is a touristic place where people go skiing: this winter too few snow has fallen from the sky, so few people went to Bardonecchia to ski and so few people were at this event. This has meant to us a very short waiting queue and a lot of spare time to have dinner. Also, all the strategy with the super-interactive spreadsheet was absolutely useless (but designing it made happy my engineer heart anyway  :-)).

Most of people were not technician: they were usually high school guys or families with little kids. In particular, a lot of children under 13 years old really wanted to try our solution, but we discouraged it because of Oculus guidelines (and some of them got really sad). Approaching this kind of people was very different: some were “scared” by our stand and looked at it for long without trying it. We had to use the system by ourselves to make people around us understand what the system was useful for, because a lot of people didn’t even know what virtual reality was.

What did go wrong?

Well, the fact that there was so few people was not good for us. But it was also some kind of advantage, because our Oculus Rift DK2 went really crazy, and we had to turn it off and on a lot of times during the exhibition: this frustrated our users and made us lose a lot of time. We wouldn't be able to handle a long queue of people, because of this inconvenient.

High volume music played by the deejay ReacTJ (that I personally think is very cool) made hard for us to speak to people while they were trying our solution. It is a problem we should solve in the future. 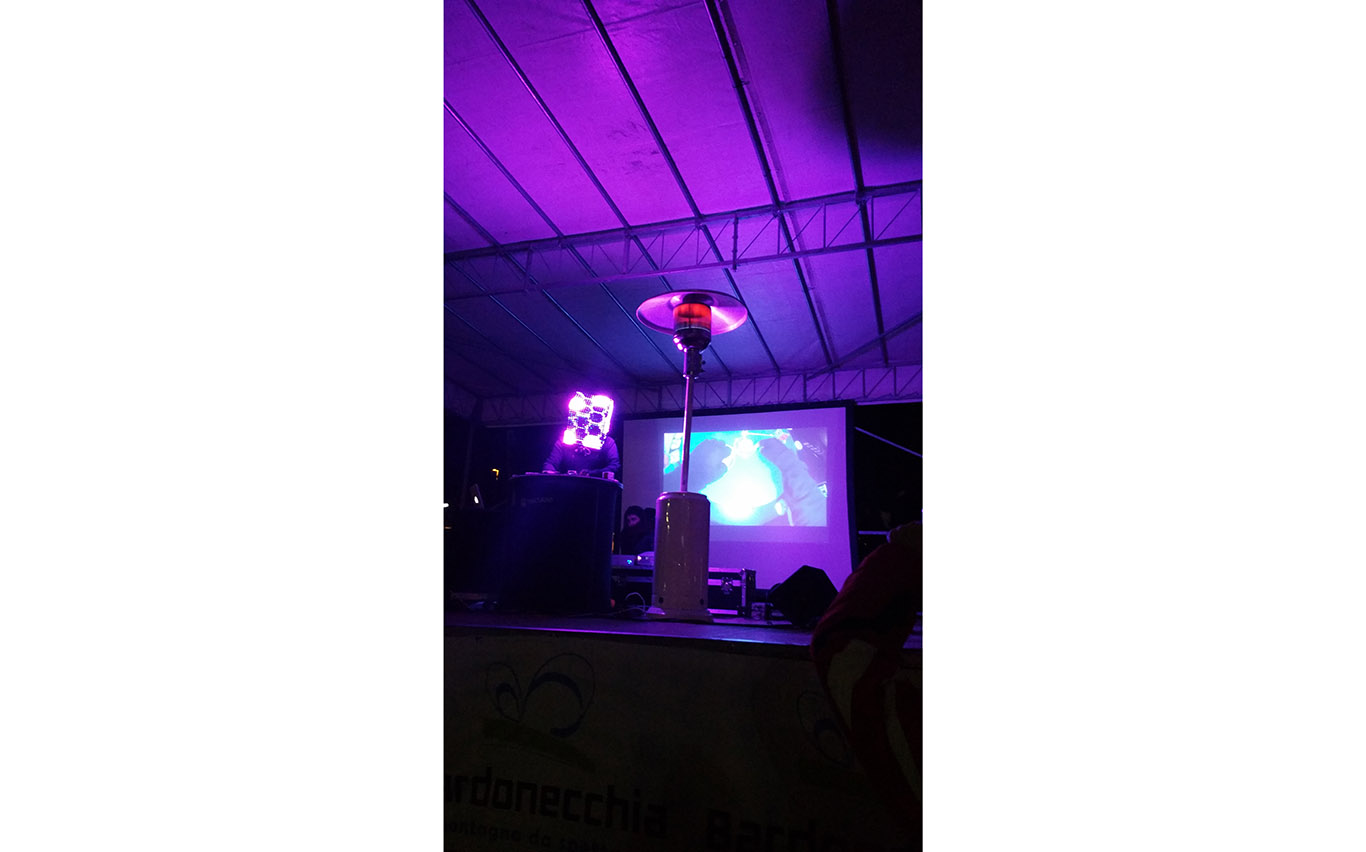 And obviously a new crazy bug showed up during the day! It is some kind of curse for us: a new annoying bug for every exhibition :-)

What did go well?

Most of the people that tried our system, liked it a lot! Seeing the excited look of the people after having tried ImmotionRoom was priceless. Interaction system was really appreciated: people loved to kick the crazy rugby ball, and almost forgot about all the rest of the demo! This taught us that we have to keep following this path and make all the next demos always more interactive. Temporization of the demo worked really well and people were able to know how much time they could spend inside the virtual world. We are now sure that the system can be used by anyone and that it is very funny for people to try it. 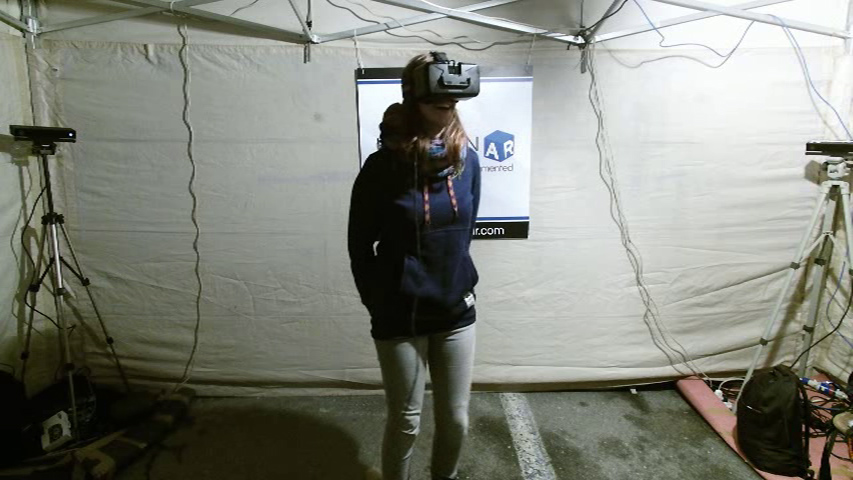 And we have known some business people with whom we could start a collaboration in the future. This is a very important part of each exhibition.

Something funny to add?

A guy who plays football tried to kick the virtual rugby ball so hard, that he kicked a chair in the real world and almost destroyed our booth!

What have you learned in this event?

I learned that each event is a different story and that it has its peculiar problems. And whatever happens, you have to keep your blood cold and try to serve people and give them the best possible experience. Shit happens and you have to deal with it.

I really want to thank again all the organizers for having given us this opportunity and for having helped us during all the event. I hope we will collaborate again in the future. And I want to thank also my adventure-mates Beppe and Gianni for their great work. 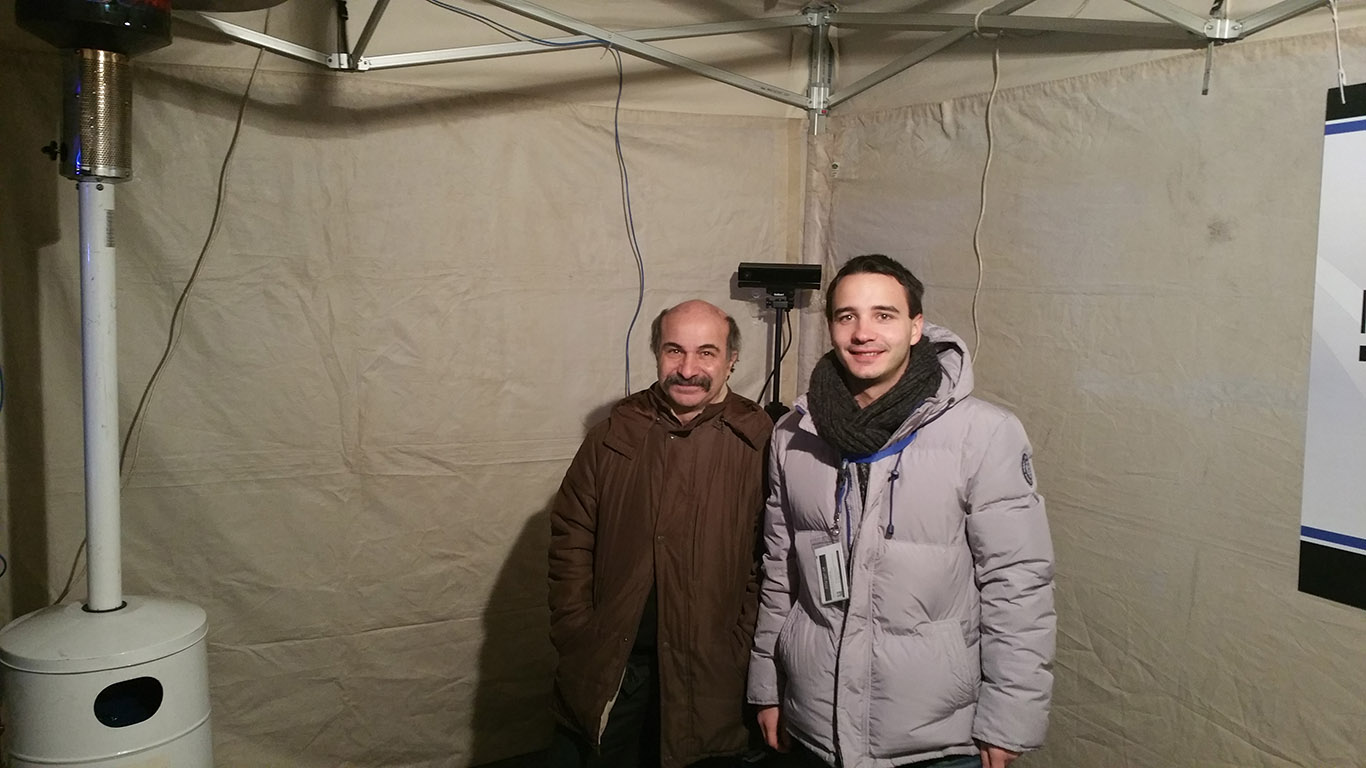 After this event I’m more convinced than ever that we are in the right path to make something that can make people excited and I’m very happy of it!

And… I wonder what nasty bug will show up at the next event… :-)