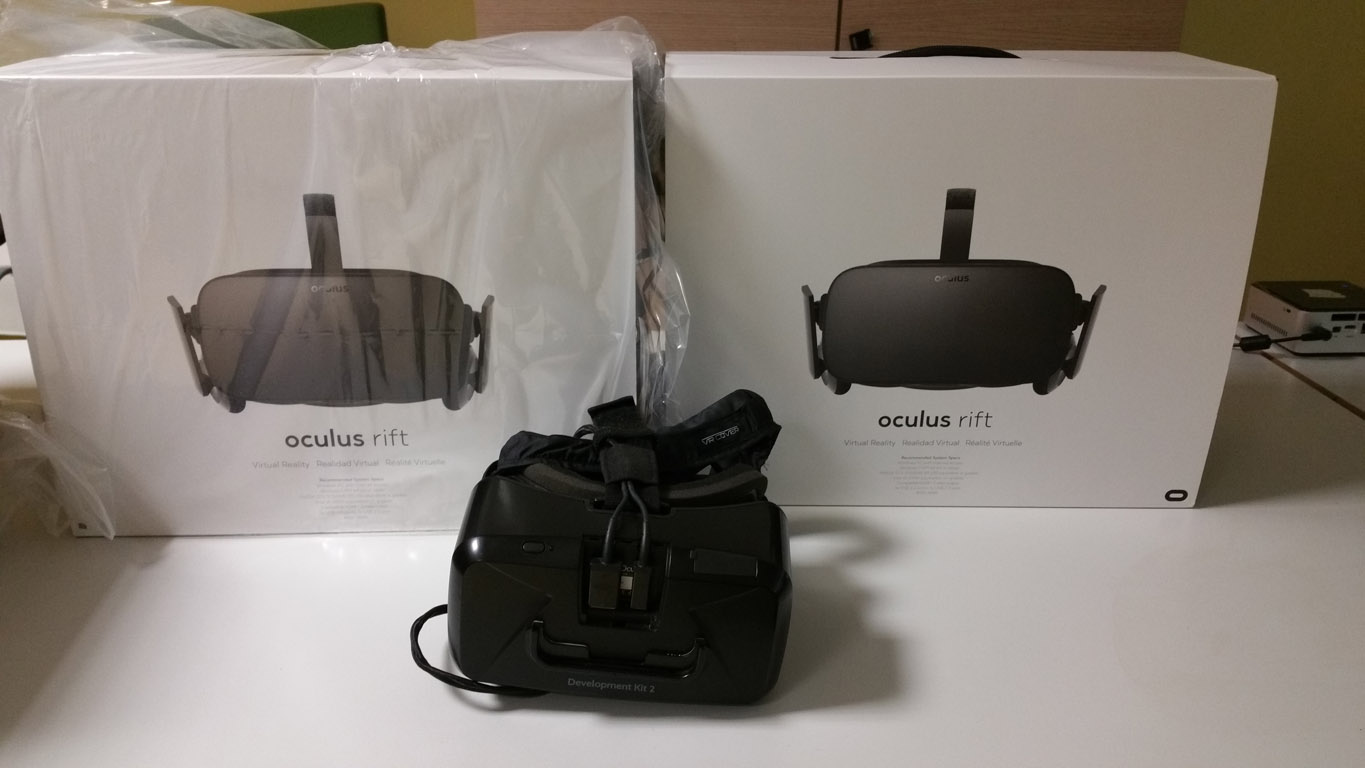 大家好！Finally our Oculus Rifts have arrived and so we have managed to try them! Ready for a super-review? It will be like the one I did for OSVR, so fasten your seatbelts! (If you’re in a hurry, read only the TL;DR at the end ;) ). Also, if you are curious about the HTC Vive, you can read our other review here!

Oculus arrives in a quite heavy box. Outside is very pretty and well crafted. The magnetic lid is just a touch of class I can’t forget to mention. 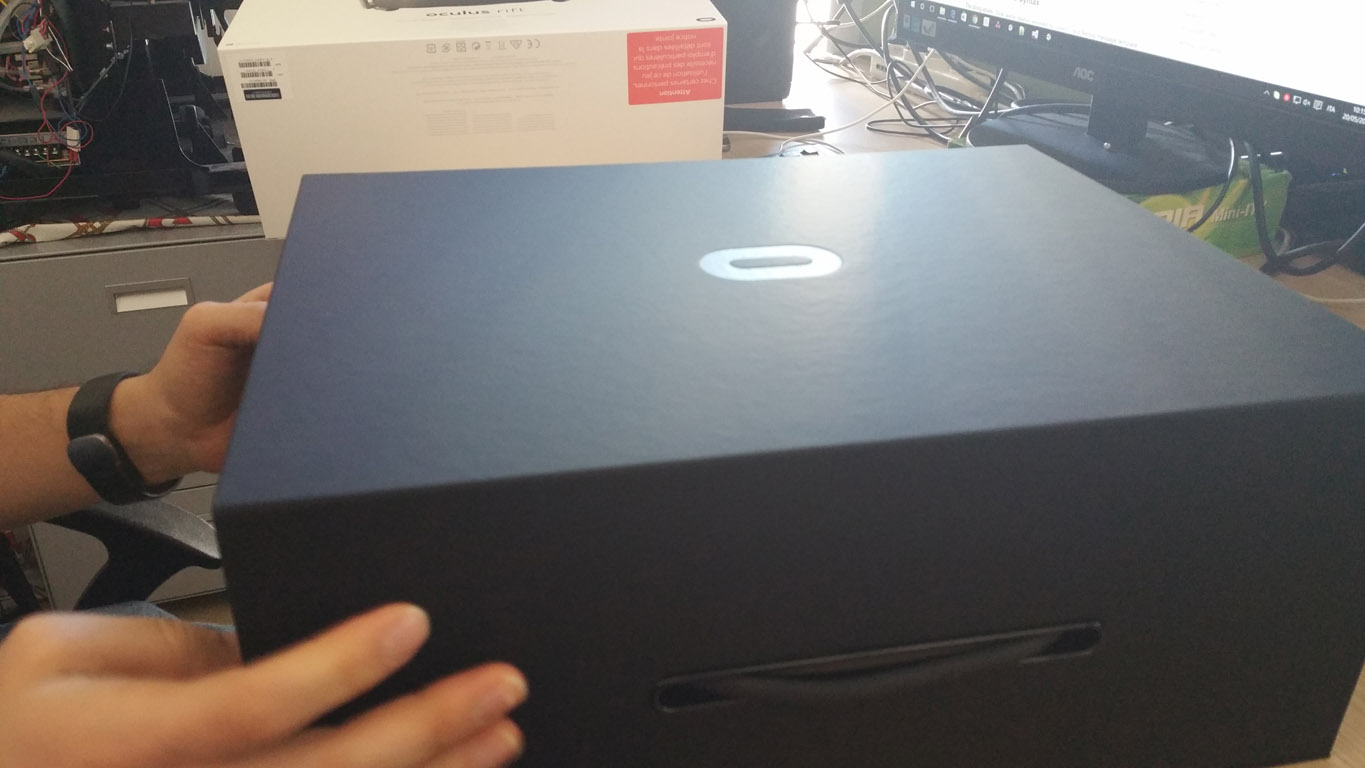 And inside it’s even better. Very elegant and solid, with all the stuff put inside with great order. Honestly I liked a bit more the interior of the OSVR box, even if it is a cardboard one, but this is a matter of taste. 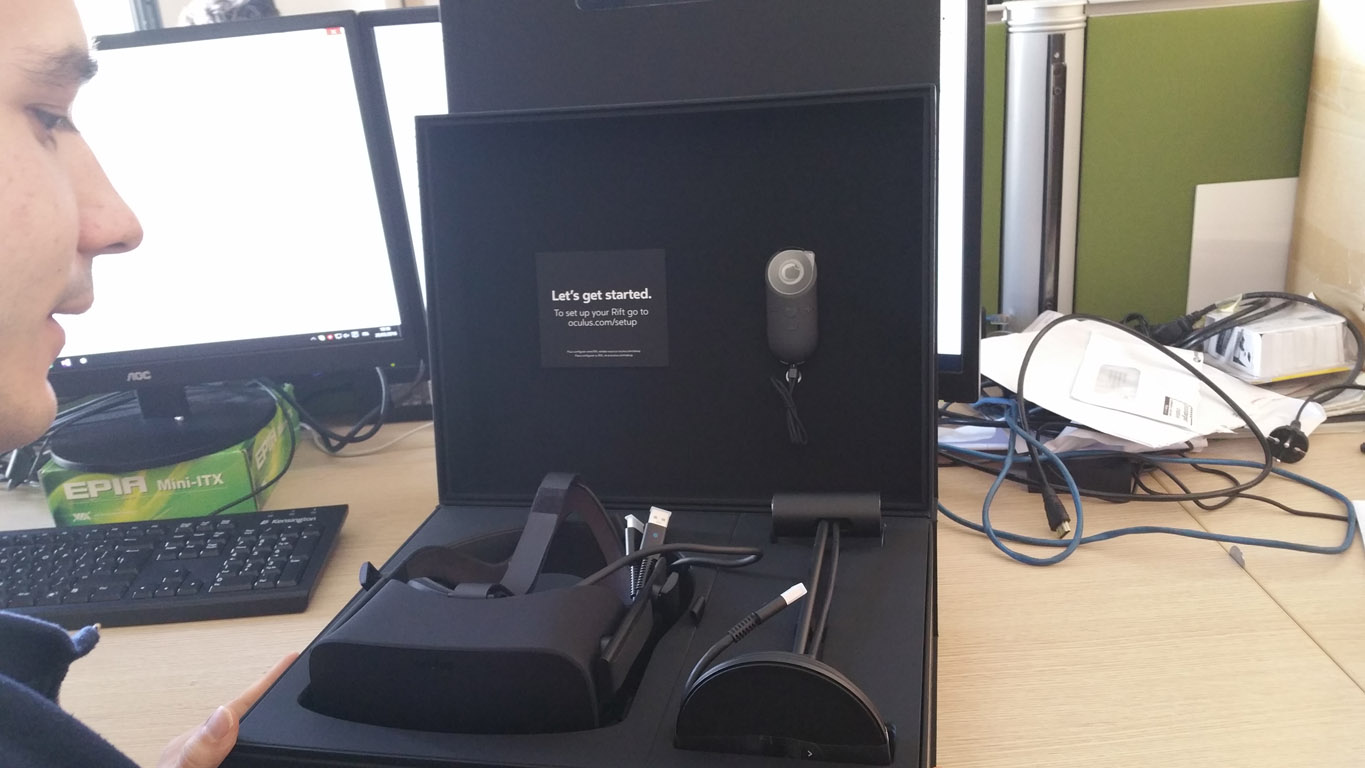 The first thing we took off has been, obviously, the headset. I was positively surprised by it: it’s really really elegant, smaller than the DK2, made with superior materials and light-weighted. Really a great product: this device costs a lot, but it has been made keeping in mind design and quality: 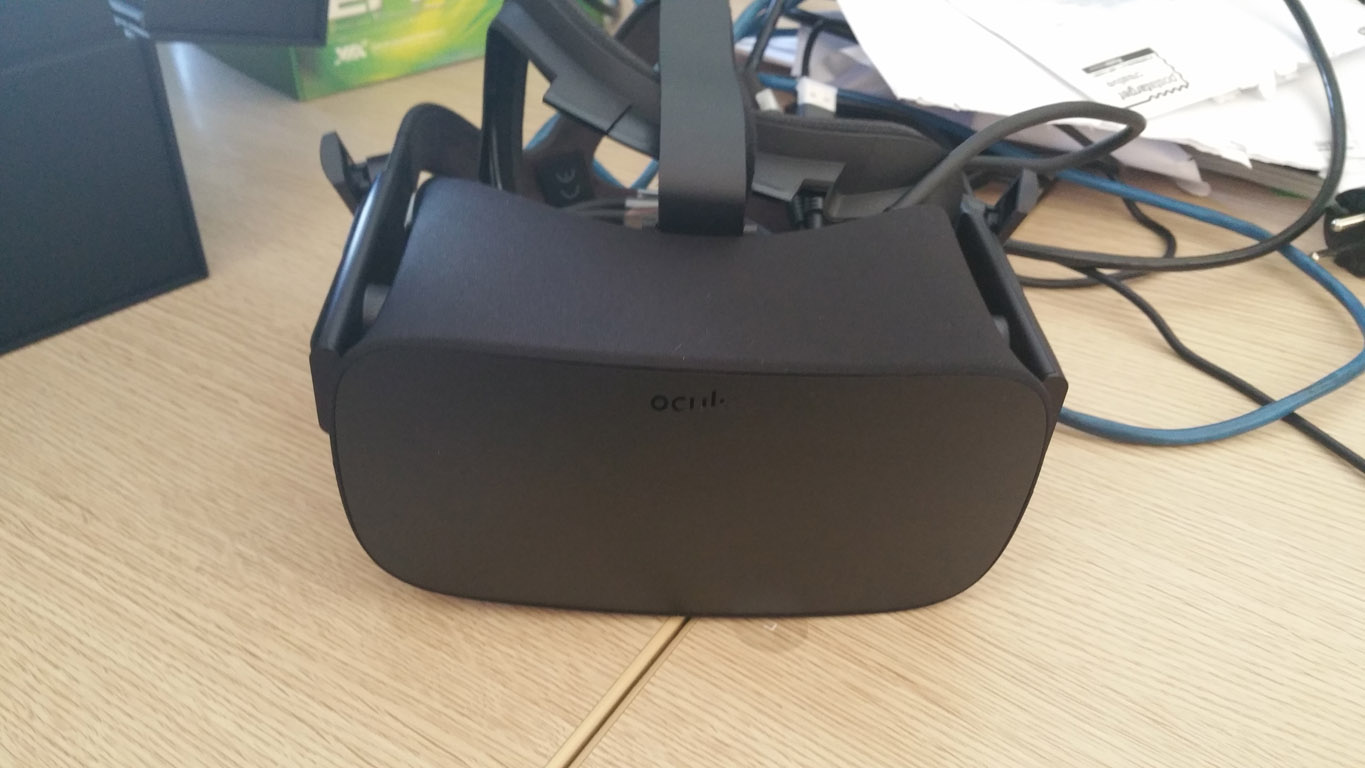 In the box is also present the positional tracker, designed to stay on the desk and not attached to a display: 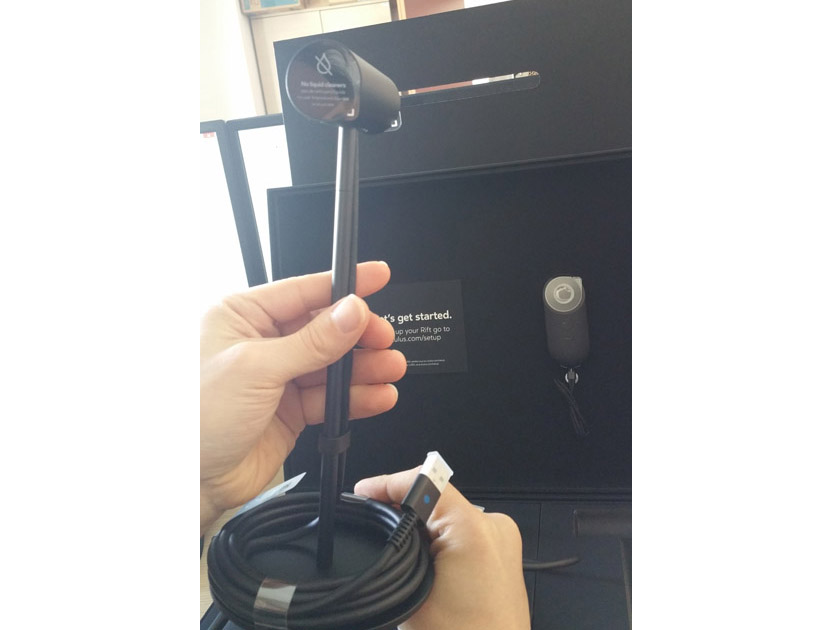 Oculus ships with two controllers. The first one is the “Oculus Remote”, a really light remote controller for the headset, that lets you interact easily with Oculus Home menus and some demos. I like the controller a lot: it fits naturally in your hand and does its job really in a great way. It is the thing that I’ve appreciated the most among the devices that ship with the headset. It’s wireless, so you can freely move with it everywhere and frees you from the pain of having look-and-stare interfaces. Great product! 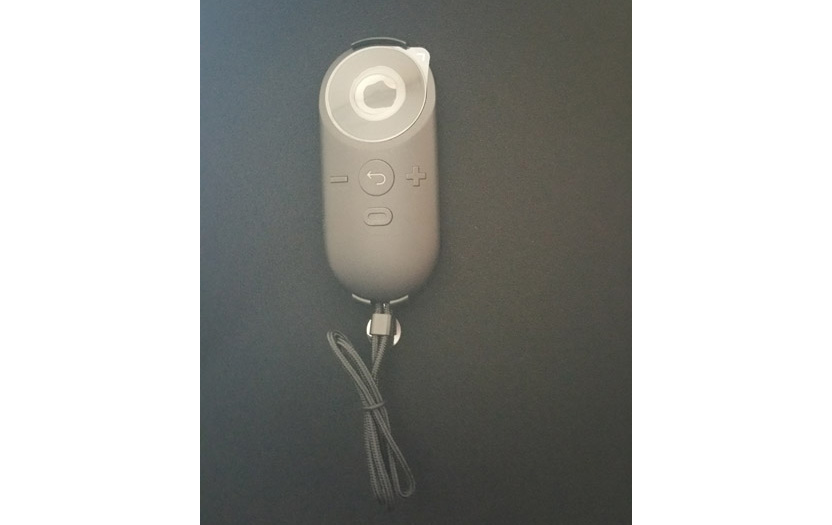 There is a lot of other stuff in the case and among them there is the second controller. I just can’t stand it: it is a Xbox Controller: come on guys, you’re sending me the future of virtual reality and you’re giving me as a controller this thing dated as the Roman Empire? Awful choice, sincerely. Why don’t give me a mouse or a keyboard at this point? Or the joystick of the Commodore? As I’ve experienced after, when I tried the Vive, appropriate controllers for virtual reality are really really important; and Xbox Gamedpad is not one of them. All praise the remote! 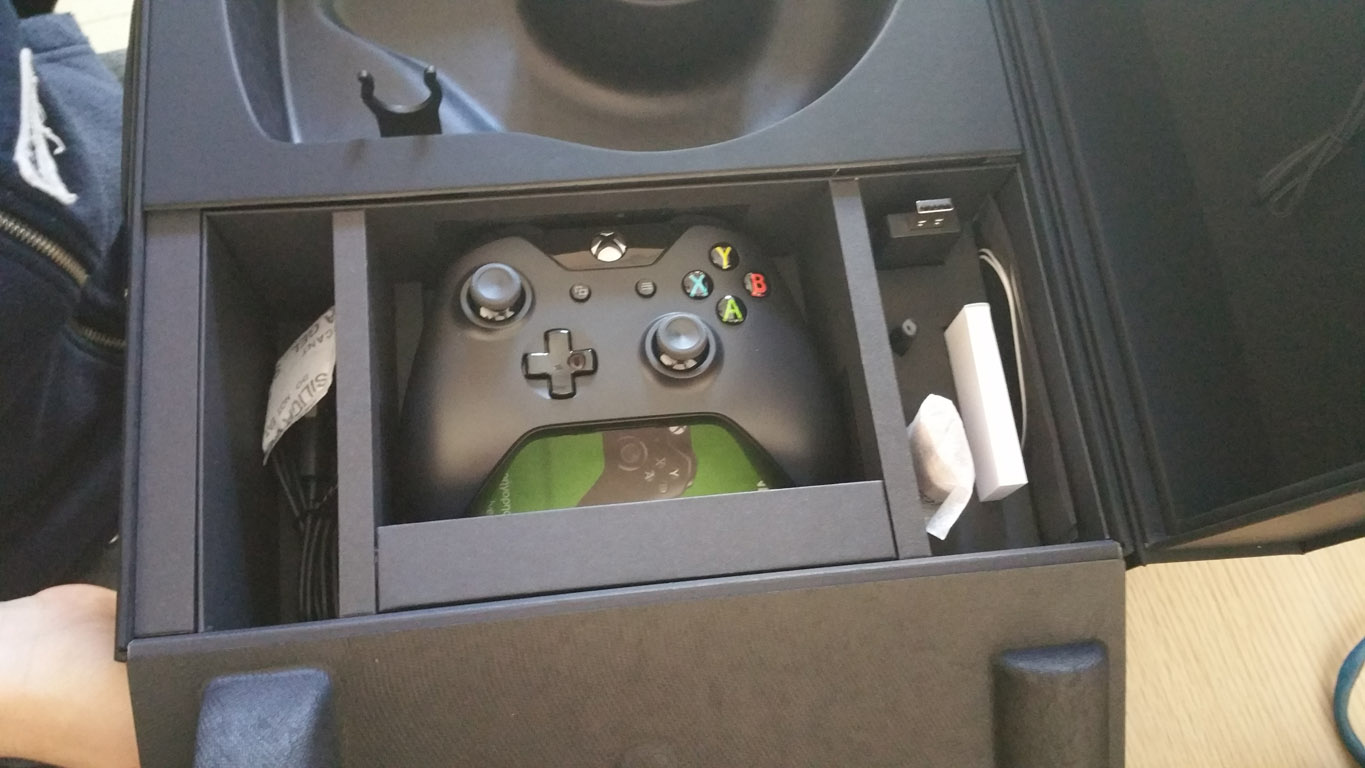 But the first prize for the most useless thing goes to the little book titled “Health & Safety and Warranty guide”: 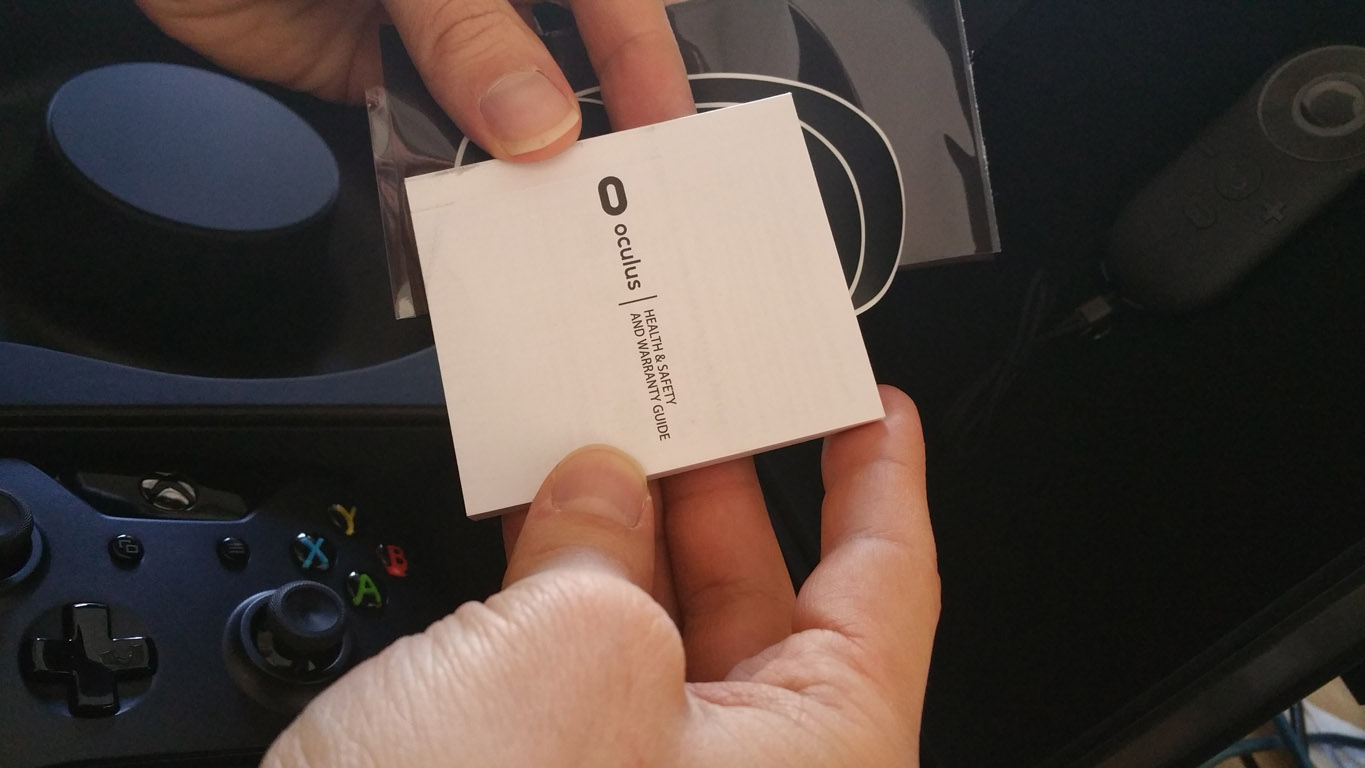 I can’t tell you anything about its contents, but I can assure you that it’s great when thrown outside the window. It flies really fast…

OK, so: done for the unboxing. Time for some installation: 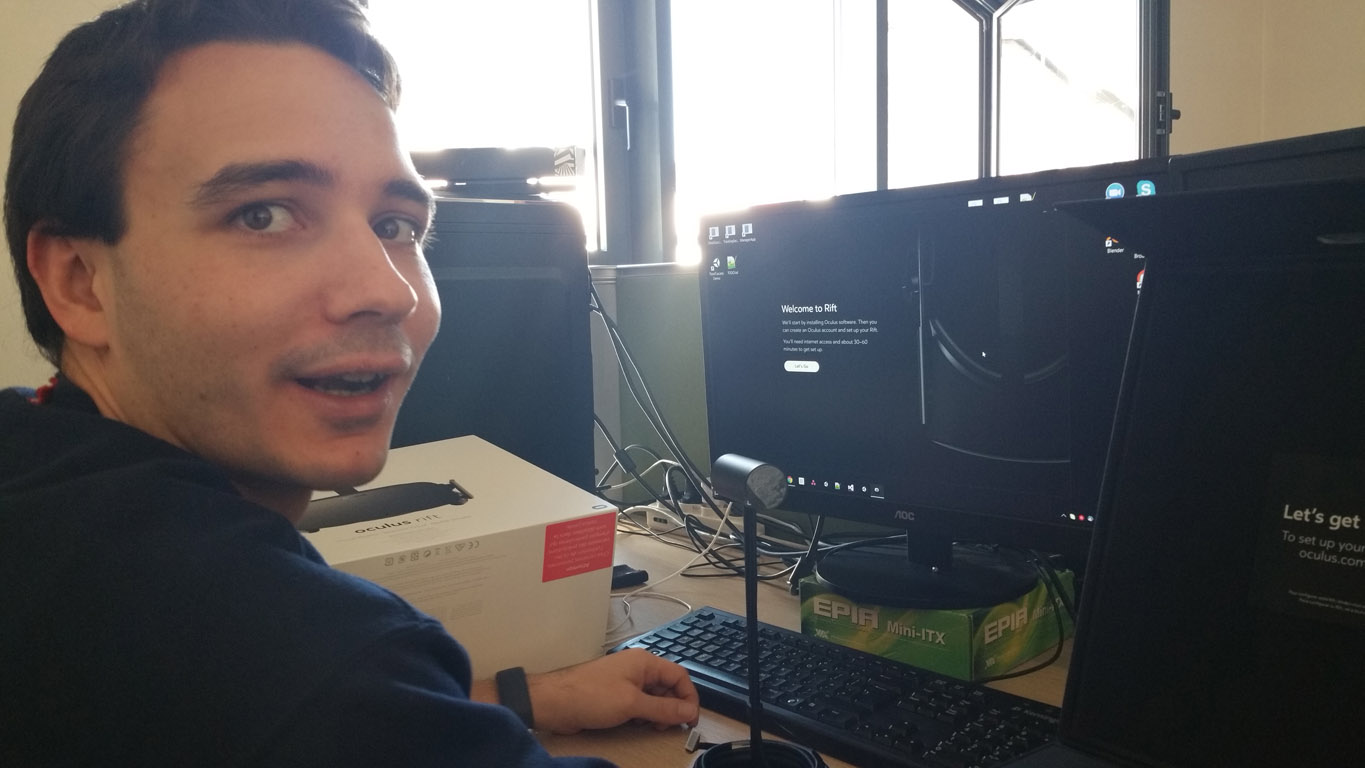 The software installation takes some time, but it goes pretty straightforward. It’s not supershort, but it’s really easy. You also have to accept some Health & Safety warning… you know, that kind of things that you say “OK, whatever” and click ok even if it’s written inside that Oculus can kill you or can hypnotize you to wear flip-flops all the day.

After a classical installation, a setup stage must happen inside the Rifts, where you see yourself inside a portal, a black room and you have to configure your height, the lenses distance and the reset orientation on the up-axis. This happens to be the first time you wear your Rift. 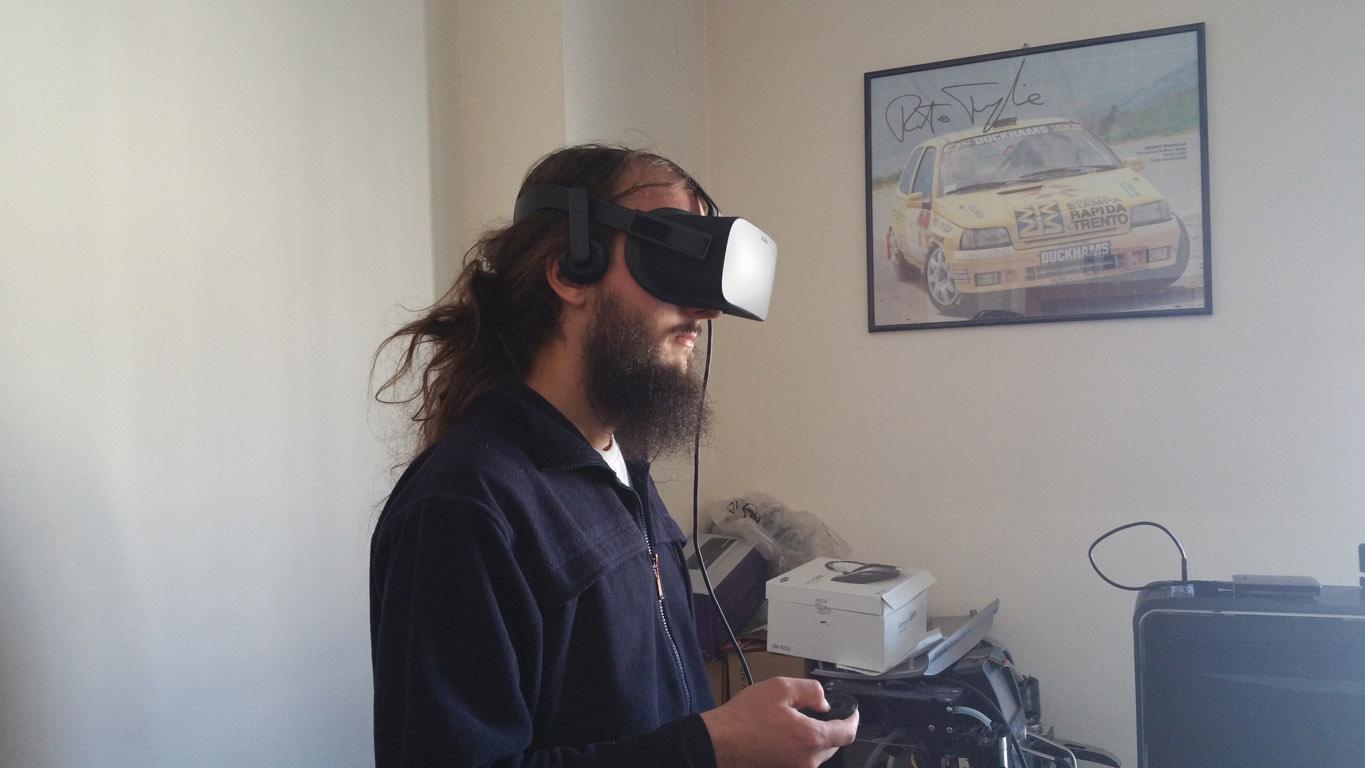 My first impression when I’ve worn them? F**king comfortable! Really, it’s the most comfortable headset I’ve ever tried: Vive, Gear VR, OSVR… are all behind Oculus in this. They’ve worked a lot on ergonomics and the results are great: the headset is really light on your head, and you can wear it for hours. The integrated audio means that you have not to wear additional headphones and this is really handy. Congrats to Oculus for this. Even the cable that binds you to the computer is very light, so I appreciate it a lot.

But there are two main drawbacks: 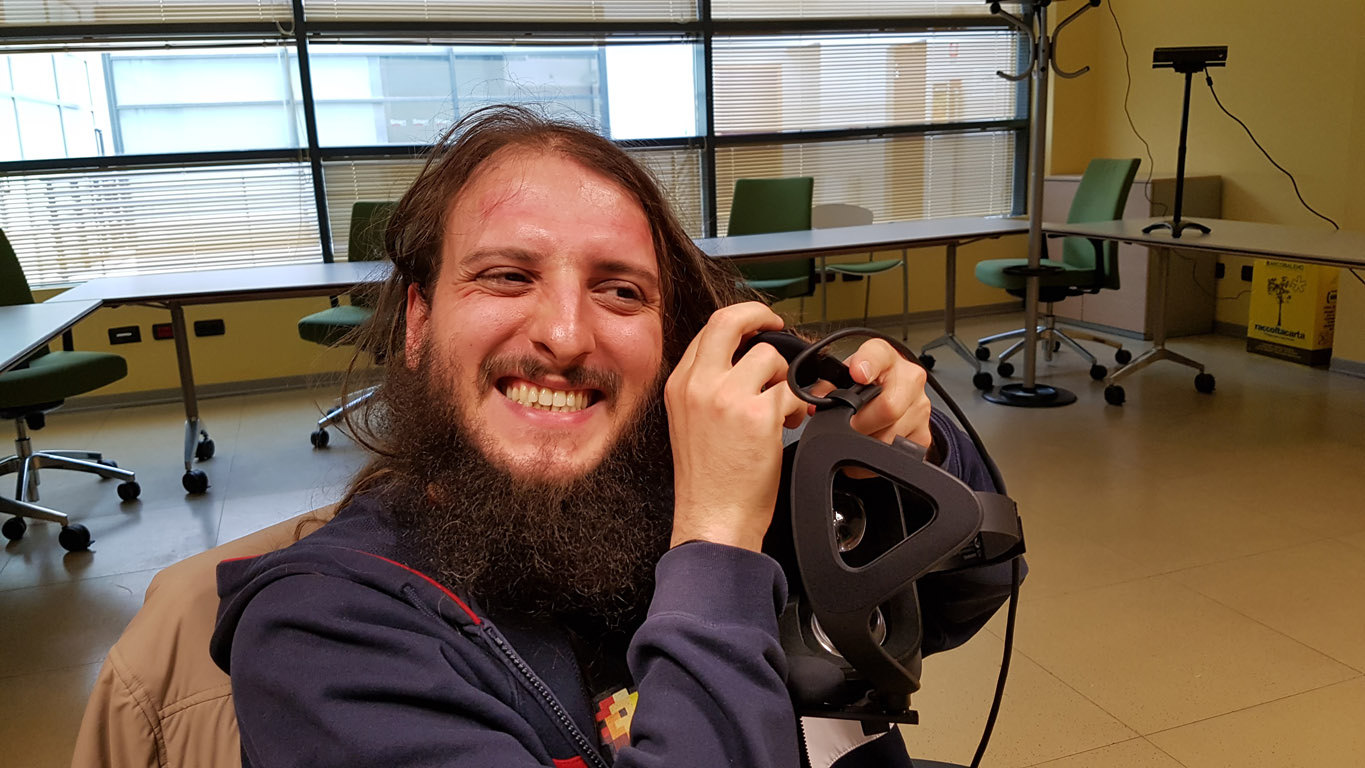 That said, let’s return to initialization stage. You perform all the operations using your head and the lovely remote. The graphics of the initialization are awesome and neat: it is super easy to perform. The only problem is in the setting of zero-orientation. Oculus positional tracker requires you to stay at certain distances and orientations or it will report problems in this stage (e.g. I tried to set zero orientation at 180 degrees w.r.t. the tracking sensor and it didn’t allow me to do this… why???).

After the initialization, you find yourself inside what Oculus calls the “Dreamdeck” (Google has DayDream, Oculus has DreamDeck… I just wonder when people choosing names in VR companies will wake up…), a white environment looking like a virtual paradise, where you can try some experiences. These are short demos to show VR capabilities: I’ve been on the top of a tall building, then in a hall waiting for a T-Rex to walk over me, then just saying hello to an alien. 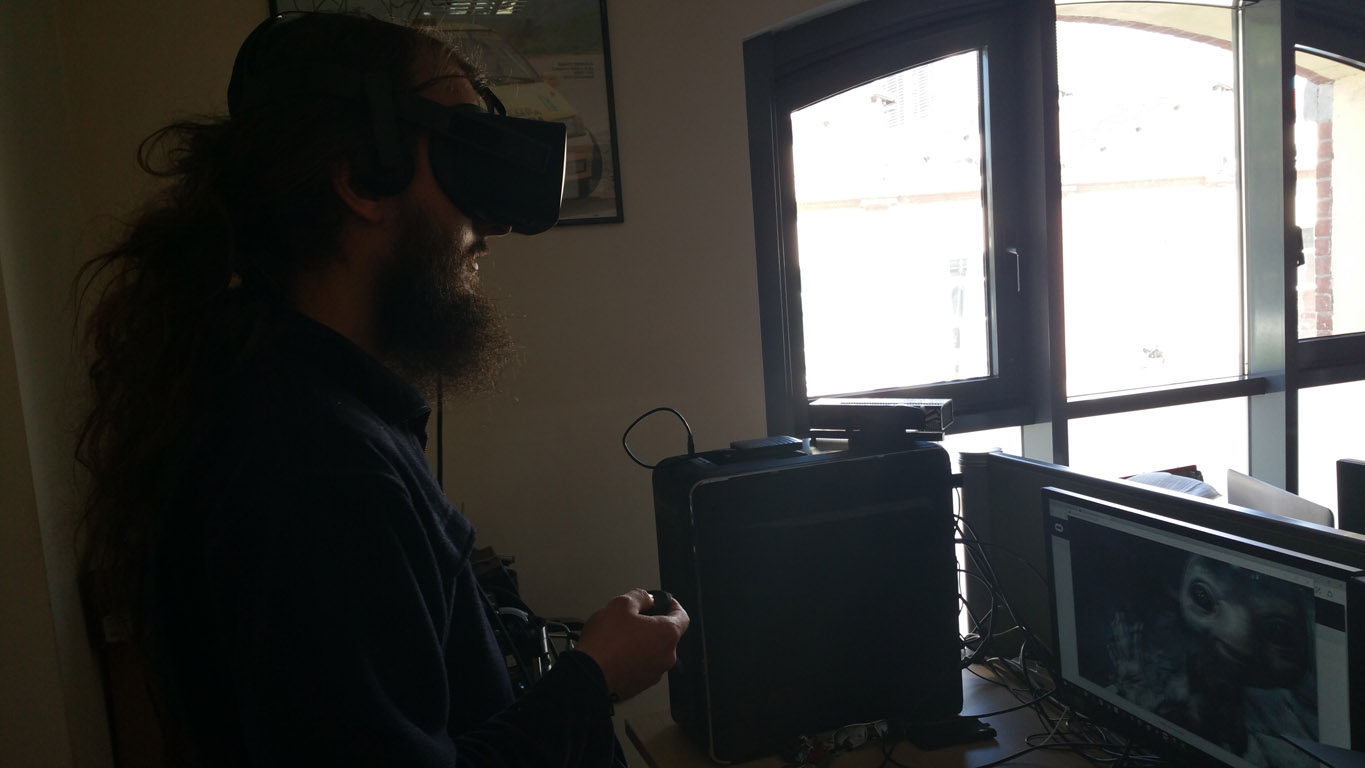 These demos are a nice appetizer, and they’re short but will amaze you with their graphics. CV1 is far above DK2 in everything. The graphic is astonishing, guys! Less screen door effect, faster response, clear images… everything we’ve always dreamt of! Really loved it!

After this, you go to the Oculus Home: an enormous house (eh, it would be great to live in there!) with the same menu you can see in the Gear VR. You command it with gaze and with the remote. Great and comfortable.

You can see Facebook hand in all that “connect with your friends” stuff, to which I kindly reply with: 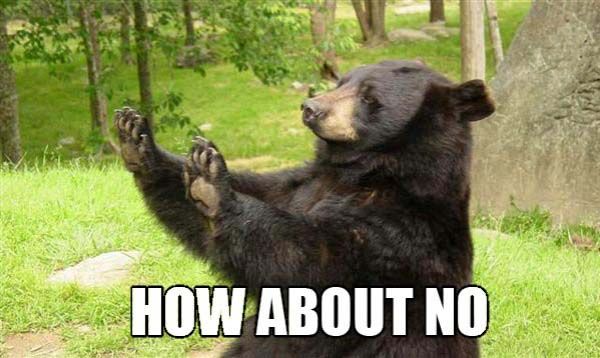 There are some great titles in the store… but really, almost nothing is free. You see a lot of games priced in the range 9.99$-59.99$ and in my case they were not worth the price (I was just giving a short try to the headset, couldn’t spend money for that). These are the things that makes me understand why a lot of people on Reddit are angry with Oculus: Oculus Home gave me the impression of a closed ecosystem, taking care of exclusivity and aimed at social integration. Personally, I don’t like this approach, but it’s my personal opinion.

Wasn’t able to try Lucky’s Tale because the Xbox Controller doesn't work on my buddy's workstation for an unknown reason, so I tried some free demos:

And that’s all for the demos I’ve tried. My final opinion is that Oculus Rift CV1 is really a great product for seated experiences: easy-to-use, ready for every consumer, very comfortable and with great graphics.

But what about my experience as a developer? Well, as a nerd, I can tell you that Oculus Unity package (the Oculus Utilities) are almost the same I’ve used in the last months, so I’ve nothing more to add to what we all already know: they’re easy to use, have fancy prefabs for the Camera and the Player Controller and have a great community behind.

We used already existing ImmotionRoom integration, and almost everything went fine. There has been only one single problem: with latest Unity + Oculus Integration, you’re unable to stop positional tracking. If you say to the OVRManager that you don’t want positional tracking, everything will just get mad and you’ll see a lot of objects doubled inside your headset (bad stereoscopy) that will make your eyes cross and your stomach puke a lot. We solved this using a dirty hack (a father game object just un-doing the positional translation), but this is a problem that has to be solved. 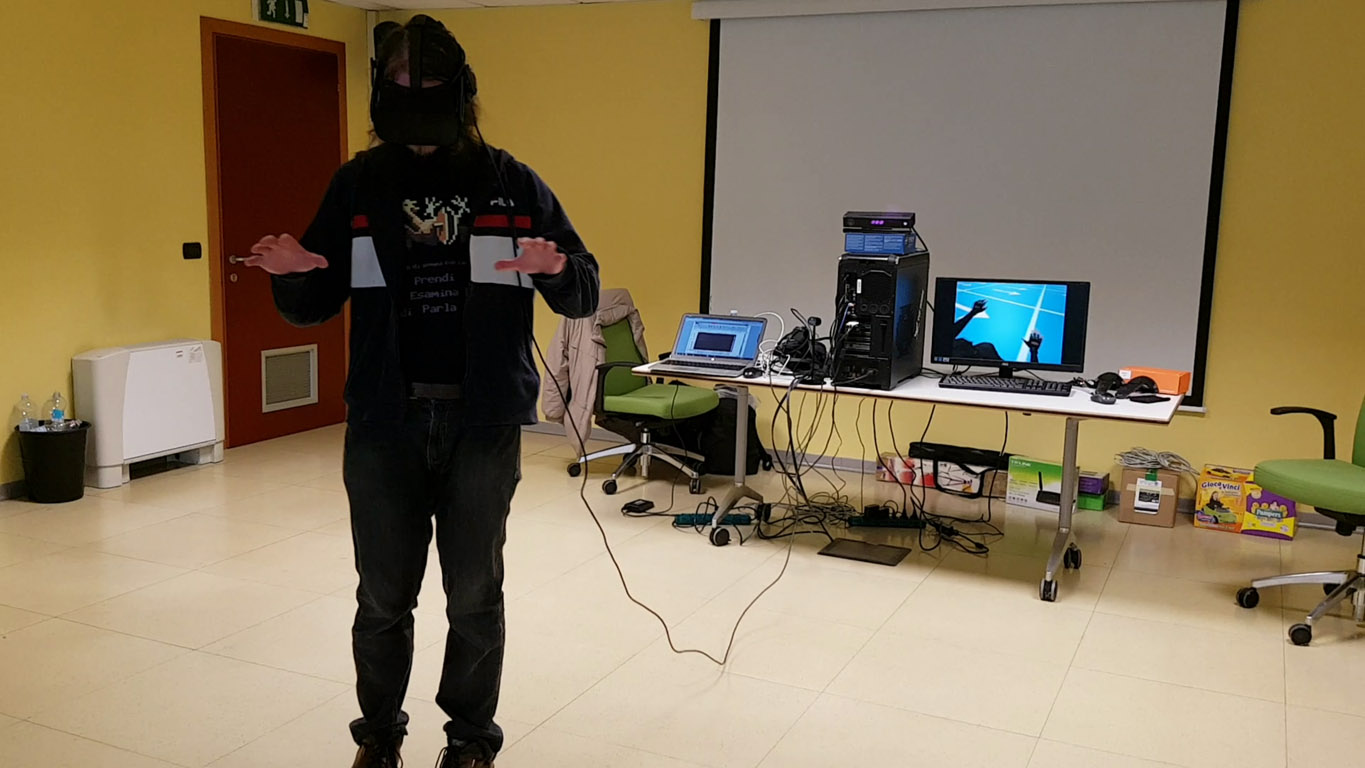 So, today we can proudly say: ImmotionRoom works with Oculus CV1!

One last thing: if you’re interested in Oculus specs, compared to Vive, look at this awesome link.

Well, just a time for a recap now:

If you’re focused on seated / standing experiences, you do have enough money and you don’t mind a console-like ecosystem, surely it’s a fantastic product. So my advice is yes, buy it!

Otherwise, if you want room-scale and a more open ecosystem, go for an HTC Vive. 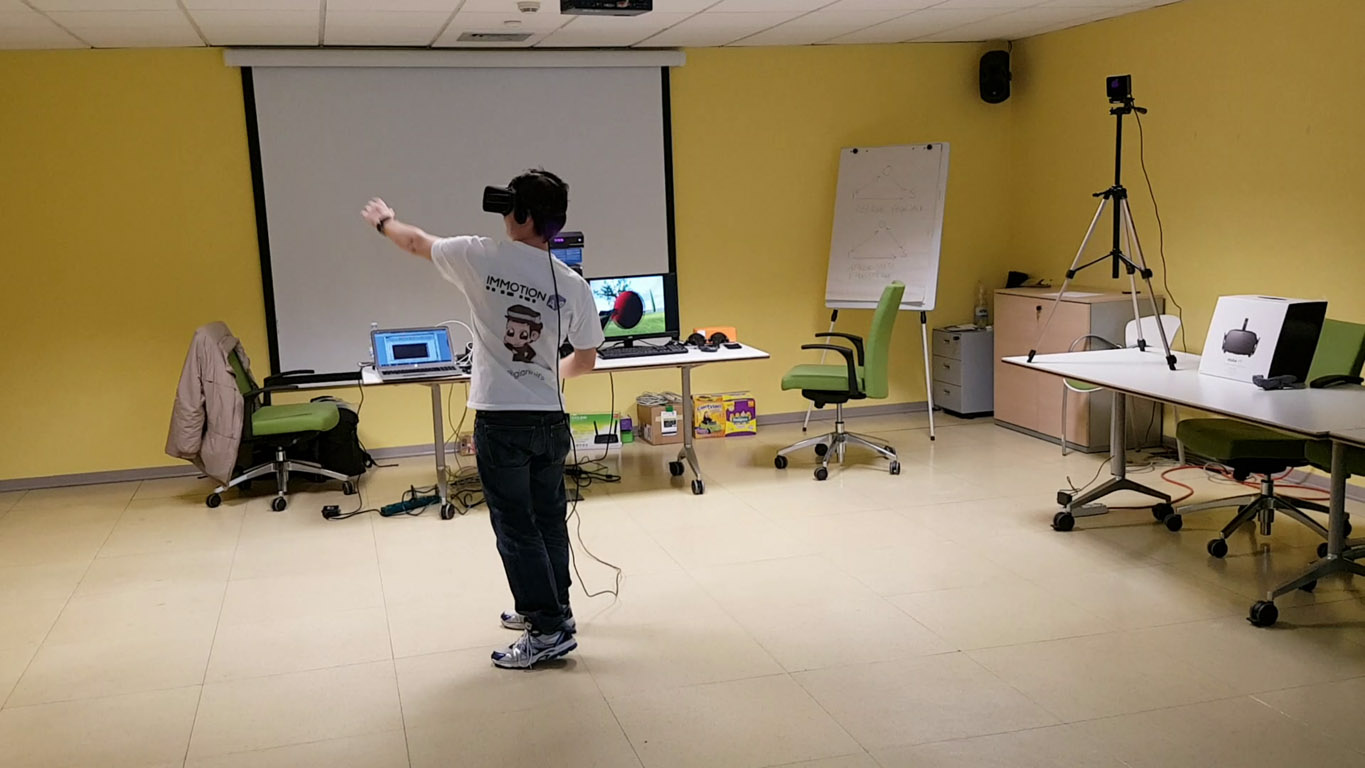 Oculus Rift CV1 is the first consumer headset by Oculus. It’s quite expensive (699$), but it’s really elegant and well-crafted. Very easy to use and to setup, it also has wonderful graphics; it is the most comfortable headset and maybe the best for standing / seated experiences. At the moment it lacks a lot the presence of a valid VR controller and its ecosystem is a bit too closed. Wonderful product, anyway!